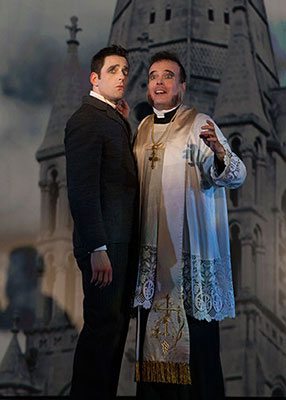 ‘A Gentleman’s Guide to Love and Murder’

Spoofing the English class system is always good fun. Vanity, snobbery, narcissism, greed — the ingredients are just waiting to be whipped into something hilarious, and “A Gentleman’s Guide to Love and Murder” does not disappoint. For those who have O.D.’d on “Downton Abbey”, this is the perfect tonic.

The show revolves around the D’Ysquith family (pronounced Die-Skwith), who are the picture of self-centered English nobility. When Montague “Monty” Navarro (Ken Barnett) discovers that his recently deceased mother was a disowned D’Ysquith, and that he’s ninth in line to be Earl, he makes overtures to join the family. But the D’Ysquiths have no time for interlopers and reject Monty. So he decides to kill them, or at least the eight between him and the Earldom.

There’s a bit more to it: Monty is in love with Sibella (Lisa O’Hare), who reciprocates, mostly, but isn’t interested in the hardscrabble life he’s offering. Even after Sibella marries, Monty calculates that insinuating himself into the D’Ysquith family can keep him in her good graces.

At first, Monty’s crime is more omission than commission. But when he sees how easy it can be to commit murder, he warms to the project. And since the D’Ysquith family has the reputation of being mean-spirited, particularly Asquith D’Ysquith, Jr. (epic fictional name), no one seems to be losing much sleep over their demise.

The acting is superlative all around. Barnett is a likeable assassin. He gets extra points for upgrading his accent and manners as he rises in the family. O’Hare’s Sibella is self-centered and selfish, and yet we can see why Monty loves her so deeply. Additional kudos to Chilina Kennedy, who plays Phoebe D’Ysquith and sings beautifully throughout.

But the stage belongs to Jefferson Mays, who plays all eight dying D’Ysquiths. Think costume changes on an industrial scale. Mays moves between characters fluidly — from snotty to crazy to gay and back to snotty. The changes are so profound, it’s not always apparent it’s the same actor.

The show is playfully anachronistic, adopting the stylings of Gilbert and Sullivan, if not the plotlines. Songs like “I Don’t Understand the Poor,” “It’s Better With a Man” and “Why Are All the D’Ysquiths Dying?” will definitely give you a grin. But the dialogue is almost as lyrical as the music, Oscar Wilde with a dash of Nöel Coward.

The show requires some intricate direction, and Darko Trenjak steps up nicely. Small touches are abundant — happy people moving around the stage, unaware their world is about to collapse. The set, a stage within a stage, is beautifully designed.

San Diego is famous for the grade-inflation standing ovation. The show could be thoroughly mediocre and some group of people will stand and applaud lustily. But “A Gentleman’s Guide to Love and Murder” deserved it. The entire theater stood in unison, without reservations.