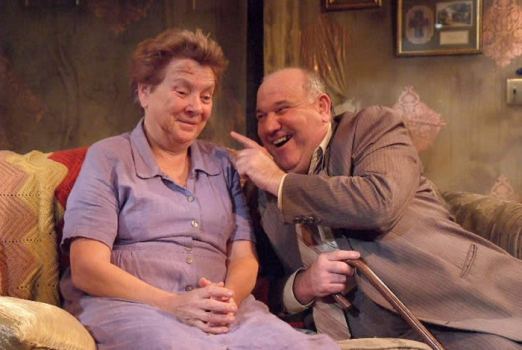 A House Not Meant to Stand

This year marks the 100th anniversary of the birth of Thomas Lanier Williams, better known as the talented, tormented Tennessee Williams.

In part because of this milestone and in larger part because of Williams’ stature in American theater, companies around the country are restaging various of his plays, with “The Glass Menagerie,” “A Streetcar Named Desire” and “Cat on a Hot Tine Roof” perhaps being the three most performed currently.

In Los Angeles, the Fountain Theatre is offering a less well-known Williams play, first staged in 1980, just two years before he died: “A House Not Meant To Stand.” Initially written in the late 1970s as a one-act for Chicago’s Goodman Theater, Williams was coaxed into rewriting and expanding it into a full-length play. He envisioned it as a “Southern Gothic” comedy.

Yes, there are some funny bits in “House” and even some that are farcical. But Neil Simon it is not. Family strife and anguish—the tap root of so much of his work—are central to “House” and its self-lacerating individuals.

Bella and Cornelius McCorkle are, as the play opens, an aging, long-married couple returning to their Mississippi home after burying their oldest son in Memphis, Tenn. A terrible thunderstorm is lashing their decaying house just as internal emotional storms are lashing them, their two surviving adult children and a neighboring couple.

“Corney,” a scheming, tyrannical patriarch, has already driven from home two of their three children—the recently deceased Chips and Little Joanie, in a state mental hospital after suffering “a little nervous breakdown”—after he’d done as much psychological damage to them as he could. And did.

He is still battering Bella emotionally, trying to get her committed to a mental hospital—but not before she reveals to him where she has hidden a supposedly large amount of “Dancie” [her maiden name] inherited money; he wants it to finance a run for a Congressional seat. And when he’s not badgering her, he’s pummeling Charlie, their other son, who has come home with Stacey, a cute, seven-months pregnant [by him] born-again religious whacko, and Emerson and Jessie Sykes, the neighbors who are also whacko in their own way.

The action—the actors are in constant motion—takes place in the seedy living room of the McCorkle house with pails strategically placed to catch the rain dripping from a sieve-like roof. To one side is a dining room, behind a scrim, where Bella frequently retreats both to escape Corney’s bullying and to retrieve memories of Chips, Little Joanie and Charlie when they were young and small; only she (and the audience) see vaporous images of three young children at play and at the dinner table projected on the scrim.

The Sykeses provide comic relief, letting themselves into the McCorkle house whenever they see a light on in the living room or the front door ajar. Both give off the sad, sour smell of sexual hunger for younger, firmer flesh [“Em,” as Corney calls him, for Stacey; Jessie for any 20- or 30-something hunk]. Indeed, Jessie repeatedly brings up rumors of a “sex fiend” in the area, but it’s clear she’s hoping that the fiend finds her and has his way with her, resist though she might.

In the end, the “gothic” of this play overwhelms its comic elements, with Emerson Sykes institutionalized by his rapacious wife; Charlie and Corney detained for brawling in a police station—and Bella trying to protect her three now-adult troubled children even as she’s dying.

Sandy Martin is a touching, endearing Bella. Alan Blumenfeld—bald, stocky as a tree stump and possessed of a thunderous voice—is an intimidating Corney. Daniel Billet, as Charlie, is a well-meaning young man, as protective of his mother as he is provoked by his father. Lisa Richards is a credible floozy as Jessie and Robert Craighead a feckless Emerson. Simon Levy, producing director, ably steered the cast through their paces and Jeff McLaughlin’s convincingly tattered set.