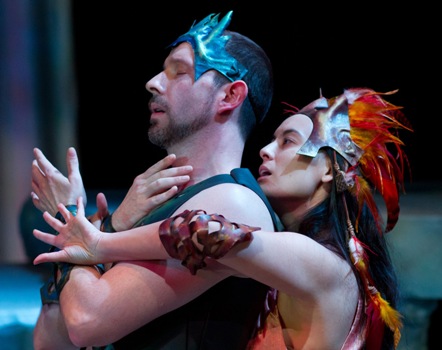 The Lantern Theater’s production of “A Midsummer Night’s Dream,” now enjoying an extended run due to demand, brings the burlesque out in Shakespeare. Not that director Charles McMahon has to milk “Dream” for laughs, but the accents in this production are on the zoundy zingers. The enchanted world of language and theatricality plays second fiddle to the lusty laughs. That point aside, with a full house and everyone cracking up at the centuries-old dialogue, somebody is doing something right.

Lantern seemingly spared every expense with a very modest physical production. The set (by Meghan Jones) is a gray slab of clay and the costumes (Mary Folino) are mostly drab linens, saved by a few bits of period lacing. The scant design work is made up for, somewhat, by a strong ensemble of Philly actors, who are nonetheless not above mugging.

The story spins off the haywire course of mortal lovers, who are, in fact, mere playthings in the land of the fairies. Egeus implores Theseus, Prince of Athens, to deny betrothal of his daughter Hermia to Lysander. Hermia, in turn, is fending off Demetrius, who is himself being stalked by Helena. In the parallel fairy world, Oberon dispatches Puck to redirect the mortals’ objects of desire and the lovelorn mayhem begins.

Dave Johnson’s Puck is very earthy (he enters from a secret place lacing up his trousers) and otherwise a dimwitted satyr, lurching about in crouched positions sniffing around and grounding the lines with magical realism. Lee Ann Etzold and Charlotte Ford are funny and touching as Helena and Hermia, both mannered vocally, until they fight tooth-and-nail for their misdirected lovers. David J. Sweeny‘s Lysander is bursting with comic ethos and Bradley K. Wrenn has boyish bravura as Demetrius.

The royals and fairies are upstaged by those mechanicals. Benjamin Lloyd’s Bottom plays the ham actor and goes really over the top when he is the object of Hippolyta’s affections as the ass. David Blatt keeps dignified somehow as Quince, directing the stooges for the wedding play. Mark Cairns channels Clint Eastwood as the earnest laborer who nails his marks however awkwardly. Mike Dees’ Flute, the frustrated thespian, plays the broadest I’m-just-a-boy-in-a-dress comedy.

There is classical relief in Charlie DelMarcelle and Joanna Liao, doubling as Theseus-Oberon and Hippolyta-Titania. They show their mettle right off in the first fencing scene and, similarly, technically calibrate throughout with commanding vocalese. Their classy deportment points up that the dialogue rhythms otherwise are all over the map. This is a “Dream” with catch-as-catch-can poetry, but plenty of comedic bump and grind for the cheap seats in the back.