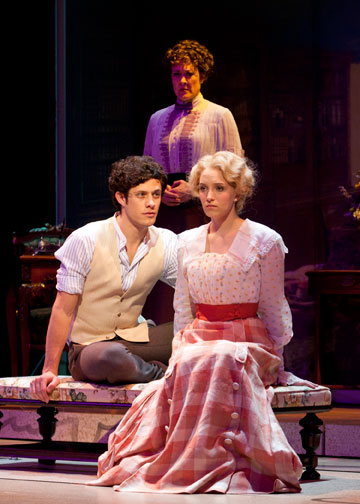 From left, Kyle Harris, Karen Ziemba and Ephie Aardema in “A Room with a View”
Photo by Henry DiRocco

‘A Room With a View’

The English, they’re so often portrayed as persnickety, and “A Room With a View” perpetuates that stereotype. In fact, the plot is dependent on a customer complaint. Despite this, the show is a fun peek into Edwardian mores and the possibility of living life, rather than just following the rules.

Set in Florence and the English countryside, the world premiere musical follows Lucy Honeychurch (Ephie Aardema) to Italy, where she is to meet her wealthy fiancé Cecil Vyse (Will Reynolds) after a fortnight in Florence. Lucy is accompanied by her spinster cousin Charlotte Bartlett (Karen Ziemba), who is more concerned with young Lucy’s safety/virtue/reputation than Donatello/Ghiberti/Michelangelo. Charlotte is not at all interested in embracing life, even in Florence, but rather preventing collateral damage.

Still, the most urgent problem is that Charlotte and Lucy’s room at the pensione lacks a suitable view. Only the interventions of chivalrous socialist Mr. Emerson (Kurt Zischke) and his son George (Kyle Harris) rectify the situation.

Predictably, George becomes smitten with Lucy, whose own feelings are more ambivalent. She intends to go forward with her marriage to Cecil (of the London Vyses), a man so upright he might fall over backwards. The question is not so much whether she should prefer George, though that is a valid question, as why she had any affection for Cecil in the first place. The man is generally insufferable.

The cast does an excellent job, particularly Ziemba and Reynolds. Charlotte is obviously a damaged soul, but Ziemba endows her with an unflinching humanity. It’s unfortunate that the incident that caused the damage could not be explored more. Reynolds doesn’t have a large part, but he gives Cecil nuance beyond what can be found in the script.

Warning, for those still nursing 19th-century attitudes: There is nudity. Is it gratuitous, mostly. But it only seems natural as characters thaw from their Edwardian freeze.

The music is catchy, especially in the second act, and the singing brilliant throughout, particularly the Italian servants Ragazza (Jacquelynne Fontaine) and Italiano (Glenn Seven Allen).

The set is cleverly designed, with images like shifting mosaic tiles evoking Florence and England. A small pool doubles as the Arno River and an English swimming hole—in which the aforementioned nudity takes place.

Directed by Scott Schwartz, the story moves well, though the comic aspects could be more thoroughly mined. Still, the show is funny and fun and will send you out smiling.