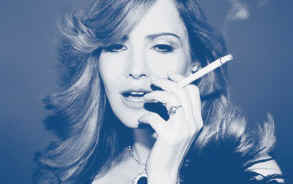 Tarted up in a pale-blue clinging wrap trimmed with white fur, the brilliant Beverly (Jennifer Jason Leigh) sashays across her living room holding a &#147;pre-party&#148; drink. It&#146;s to help her loosen up before her guests arrive: &#147;Y&#146;know, to relaaax a little&#148; she announces in a full-throated bray to her beleaguered husband, Laurence (Max Baker). He, trying to do real estate business over the phone, extends an arm to placate her. The poor sap is tense. She clicks on the stereo: &#147;Oh c&#146;mon, you need it too,&#148; she taunts him, flipping her long, aggressively blonde hair at him and flicking ash from a cigarette holder that misses the ash tray and lands on his sleeve.

Beverly is "in your face," about as subtle as a blowtorch and equally scorching. She&#146;s a bb all right. But she knows how to move. Guests arrive and every scrap of party talk works not much through her head but through her body, a sinuous work of art. The men see it &#147;feelingly.&#148; When well watered, she gets Jose Feliciano on the stereo and belts out &#147;Come-on Baby Light My Fire&#148; at full throttle, just her and Jose, swaying with eyes closed on sex in dreamland; she nearly drives the witless-guest-husband into a post-orgasmic coma. Her own is beyond retrieval.

With Abigail&#146;s Party (1977), Mike Leigh roasted the suburban, lower middle class, not expecting much of an audience for the play and bowled over when it became a sold out hit. The piece, after all, had something unpopular to say about a group getting unprecedented attention from the English establishment as well as established writers. Leigh isolated his target and skewered it in theater as well as the prizewinning films, Secrets & Lies and Vera Drake. He still prefers to make films; but Leigh&#146;s well known methodology for film and theater alike involves his actors in a process of improvisation that Vera Staunton, for one, likened to &#147;falling out of a plane without a parachute.&#148; He involved Jennifer Jason Leigh in a similar process with Abigail, considering theirs a collaboration to the extent of sharing 50% of the royalties with her. The company began rehearsal without a script.

From the other side of the curtain, Leigh&#146;s reputedly full frontal attack on manners and mores is actually quite circumspect. Leigh wrote Abigail as an interlude of sorts between more ambitious projects. While many of his works zero in on the foibles of the upwardly mobile in post World War II England, he treats these people almost kindly. None exemplify quite the complacent ignorance that he damns genially elsewhere. Two couples drink, snap at each other, at first without malice. They are not deeply interesting as characters, precisely the point; but they do grow tiresome; and almost because of it, finally, dangerous.

The play&#146;s structure is perfectly classical. A party brings together five neighbors on their good behavior. They fumble, generally, through greetings and &#147;catch-up&#148; gossip bordering on the trite and inane. After all, the real party as they mournfully acknowledge is being thrown next door by one neighbor&#146;s teenaged daughter. The adults are just keeping out of the way. Meek Laurence tries to get classical music on the stereo; Beverly won&#146;t have it. Other mild disagreements erupt: over the neighborhood &#147;going down&#148;; over kids having no manners; about nobody caring for literary classics&#150;Laurence, natural victim, owns gold edged book-club editions of Shakespeare and Dickens neatly stacked, never read. Then talk becomes still more aggressive, argument spins faster; Laurence tunes in Beethoven&#146;s Fifth Symphony on the stereo at top decibels; and the occasion degenerates into chaos. Beverly the Bold shoots Laurence the Weak. End of play.

Well, maybe literacy was taking sufficient hold to soften the definitions of high and low culture. Laurence might not have had to die as the only hold-out for Shakespeare and Beethoven. Television probably did more to educate the masses than either of them. What&#146;s interesting is that contrary to the implications of its success and long run, the play&#146;s depiction of lower middle class characters did not in fact turn them into darlings of the theater world. Leigh was, however, turning to a vogue for the type that had been fed by several historical and aesthetic factors converging long before in the &#145;60s. Briefly, film took up the working class; Osborne&#146;s Look Back in Anger, demanded recognition of a new, contentious theater that no playwright thereafter could ignore. Mike Leigh, by 1977, had turned his hand to the quite different film projects named above and the brilliant Topsy Turvy, film on theater. He says Abigail&#146;s Party became a cult classic as a result of a fluke. He had been importuned, he as much as says, to write a play for the Hampstead Theatre in London &#147;to plug a hole in their schedule.&#148; He did. Then a taped version of the play aired on the BBC during one of the worst storms ever known over the British Isles. Sixteen million people stayed home and tuned in to Abigail&#146;s Party.