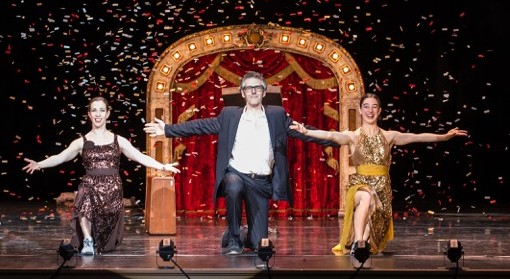 For 20 years public radio maverick Ira Glass has been the snug talking nasal pitched storyteller of “This American Life.” Of the hundreds of stories he has broadcast and produced each one features someone telling their personal and very human story shaped by his perceptive and often beguiling questions. The person’s voice, the interviewed, is the texture of the story creating a very tangible intimacy with radio listeners. Glass’ one of a kind voice is not only distinguished by its tone but by his subtle manipulative questioning, editing, and contextual overlay. In essence there are always at least two stories taking place on “This American Life” like sonar vibrations that bounce through one another. With “Three Acts, Two Dancers, One Radio Host” he has taken his radio program out of the ethers and onto the stage with all the signatures that listeners would expect; voiceovers, music, sound inserts, and live speaking mixed with prerecorded conversations. He has added dance and props, and even cameo appearances by a few members of the audience.

Glass has always had the knack for being a heady minimalist (which, sounds like his first cousin–once removed–Philip Glass) and the three acts showcase this aptitude as he and the dancers playfully, recklessly, rollercoaster through universal topics like; falling in love, what it means to stay in love, losing what we love, and the short inevitable career span of dancers. With Glass exclusively doing the narrating, the three acts maintain their charm and poignancy throughout. Accompanying these acts is minimalist staging in a vaudevillian fashion; a suitcase, a chair, a miniature curtained proscenium that performers can enter and exit through, a disco ball (hand held by a stagehand for comic affect), rainbow balloons and, the occasional burst of ticker tape.

To the established structure of “This American Life,” Monica Bill Barnes has directed and choreographed, dancing with her long time colleague, Anna Bass. The two dance like sisters that have worked out the choreography in their teenage bedroom. They are naturally comedic, muscular, and irreverent, competing with each other as a sign of their love and connection. They are Glass’ backup girls, showgirls, and corps de ballet when the three of them attempt dancing together (with Glass going out of his way to prove he’s not a dancer…) They are also mute story tellers in their own right, framing out the ends of particular segments while dancing to James Brown’s “Sex Machine,” Dionne Warwick’s, “I’ll Never Fall In Love Again,” and Johnny Mathis’ “What Will I Do?” Yet, beyond the camp and slapstick antics are two touching dances that both take place in Act III. The first has them dancing with wood framed chairs in their teeth, heads tilted skyward, and the second is a slow dance they gingerly maneuver on a dimly lit breakfast table among cups and dishes. This modest dance is emotionally charged as they somberly partner each other wearing raincoats that also seem like medical gowns, as plates crash to the floor. The table is the perfect metaphor for an intimate relationship that has lasted decades—both that of Barnes and Bass, and the poem Glass reads written by the husband whose life long wife is dying in front of him. What is rather surprising about Glass’ stage presence is just how much charisma, confidence and charm he has and how natural he is as a fully embodied thespian. Glass is clearly more than just another pretty talking head.

At a time when politics and terrorist have highjacked social consciousness, “Three Acts, Two Dancers, One Radio Host” is pure joy, a much-needed laugh that is never far from substances. It consistently adds depth to effortless smiles and full up chuckles and, it was as fresh on Saturday night as it was when it premiered at Zellerbach Hall two years ago. With only six remaining performance in this world tour it’s a good thing it was brought back to the Bay Area a second time.