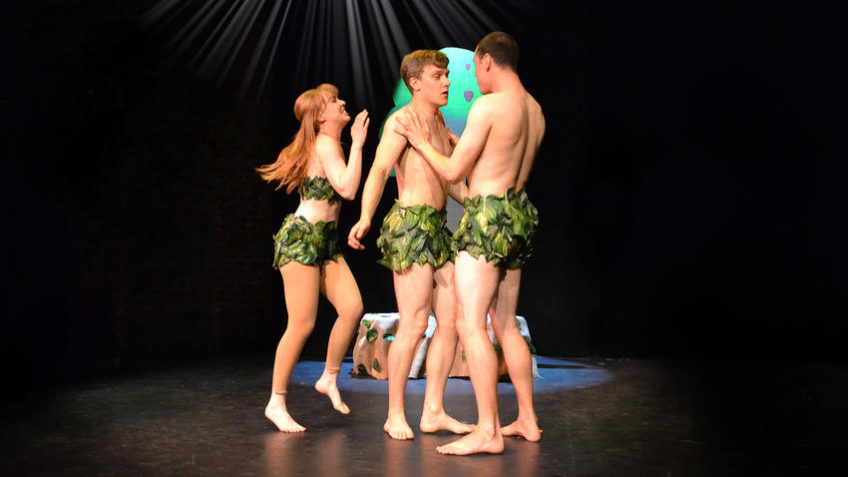 Book and Lyrics by Chandler Warren

The elements of farce, according to theatrical canon, are absurd characters and situations, slapstick physical humor and shovelfuls of risqué banter and behavior.

“Adam and Eve and Steve, A Musical Comedy” satisfy those criteria and then some. The five characters — Adam (Michael Spaziani), Eve (Kelly Dorney), Steve (Jotape Lockwood), the devil Beelzebug (Weston Nathanson) and God (William Knight) — are all whack jobs in the Garden of Eden. The time is an anachronistic mash-up of 100,000 years ago and today. Adam, Eve and Steve are dressed in prehistoric camo skivvies, while Beelzebug sports a tux and God a natty business suit.

Eden, which I’d been led to believe in grammar school was a lush, verdant place, turns out to be two benches, a faux tree with one bright-red wooden apple, and a privacy screen behind which the performers hide when the script dictates. The plot — well, forget about the plot; madcap is as madcap does — involves the interplay of the five characters: the competition between Steve and Eve for Adam’s affections; Beelzebug’s burlesque top-banana antics; and God’s bumbling efforts to impose some order on the chaos.

Steve is gay and Eve hetero; director Marmo has Lockwood play Steve with an over-the-top prissiness and Dorney’s Eve with a brassy Miley Cyrus attitude. Spaziani’s Adam is a puppy not yet familiar with the game of love and sex (after all, God created him only five days earlier as a full-grown, handsome male). He has puppy-love feelings for both Steve and Eve and — but wait a moment — no spoiler I, you’ll have to see the play to see how this works out.

The cast scatters contemporary one-liners that could have been lifted from or written for any Seinfeld episode; there are references to “gluten-free;” “Ikea furniture;” “Whole Foods;” “spanking the monkey” and “choking the chicken”; the bachelor Bobby from “Company”; “Doris Lessing” and many more. My favorite was this exchange between God and Beelezbug:

God, scornfully: “You don’t have any friends.”

Beelezbug, defiantly: “The hell I don’t! My circle of friends includes Hitler, Saddam Hussein and the Kardashians.”

Oh, and let’s not forget Adam-Eve-Steve is a musical, with 15 songs and five reprises, pleasantly melodic and wittily lyrical (aside from two or three maudlin laments about love).

There’s some fine hoofing, too, by Adam and Eve and (especially) Steve, with lots of booty-bumping. Beelzebug and God even manage a sweet, old-fashioned soft-shoe together.

All told, “Adam and Eve and Steve” is a cheerful mishmash with a helluva lot more humor than, say, a play about Jeb and Carli and The Donald.