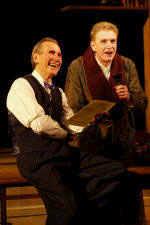 It’s a talk play. Or more of a situation than a play. Two men read their letters from each other aloud. That’s all that happens onstage while we learn about their circumstances over the course of two years from November 1932 to March 1934. One owns an art gallery in San Francisco;he’s Jewish. The other is a banker, no, The Banker, in Munich. Direction (Frank Dunlop) is taut; performances are superb; each actor looks the part. Max Eisenstein (Jim Dale) is slight, sad-faced, a quiet man; Dale acts with his whole body. Martin Schulse (William Atherton) is taller, blonde, confident, projects the strongest possible image of Eisenstein’s Nazi adversary. The language is pitch perfect–not a single hint of purple gets into a line, not a single cliche in a topic that has accumulated hundreds of them.

Still the play is a hard call, as it raises issues both explicit and implicit and each important. The playwright (Kathrine Kressmann Taylor) wants us to see history with new eyes, to get an inside look at the impact of Hitler’s growing power on money and bourgeois attitudes. The German, inevitably representing the killer of millions of Jews, is presented as a complacent instrument of social and political forces. Taylor seems to want not to exonerate, but simply to describe or maybe explain what happened. No moral valence attaches to the action or the tale being told, and that may be part of the play’s trouble.

There’s no such thing as a good German in his role against the Jew; other drama and films have attempted to make the case and failed. They are a pair as firmly etched in mind as any fictional types: big and little; angel and devil. The spectator’s habitual response to German and Jew needs to be derailed, or maybe detoxified before this new view can "take."

Here’s the situation that emerges, slowly and mainly in retrospect. A young American Jewish actress on tour in Munich in 1934 is turned over to the Nazis by her brother’s best friend, the banker. The girl came to his door asking, "hide me." In his place, he asks? Filled with wife, children, servants, tutors, secretaries, a veritable physical plant of bourgeois life. You surely see, he explains to his friend via cablegram and letter, that I could do no such thing.

So he sent her off to Storm Troopers who killed her. The Banker fears he has been compromised enough by receiving letters from a Jew, albeit an American in San Francisco. The Banker is a prominent figure in the community and, after all. Jews make trouble. You can’t have them as friends; something will go wrong. And indeed, the letters from Eisenstein do indict him. Though he joins the party–he says it’s full of energy, new vision; it offers Germany a fresh shot at life, all of which quash his initial, slight misgivings about the party’s "rightness"–he is hauled off and shot for "associating."

A plausible premise? That a touring Jewish American actress is so important as to be killed in Germany in 1934, when Hitler is building up his legions and consolidating his power as Chancellor. Jewish businesses indeed were boycotted in 1932 when Hitler became virtual dictator. The first concentration camps were erected the following year. Still, the general public knew but few facts about political activities and it seems extreme that The Banker is hauled off for his impolitic correspondence. Being a keeper of and dealer in money was the single most significant role to play for the party. Anyway, this Banker begs his friend to quit writing him.

But the canny friend obviously knows, once he learns his sister has been killed, that the mere addresses on the envelopes of his letters will convict the turncoat. Nothing is said, but Dale celebrates and chortles over an envelope with a wickedly, gleeful little hop and dance on his side of the stage.

The play’s undeclared moral values matter in an unexpected way. The playwright’s switch from the habitual association of German as bad guy to German as victim needs him to be appealing, sympathetic, attractive. A rich banker threatened by the appearance of his Jewish friend’s sister at his doorstep does not automatically stir up moral righteousness. Maybe some disgust at his callousness. Moral responses, in any case, do not hang loose in the atmosphere, so to speak, ready to be seized by the audience as needed. I cared not at all what happened to the banker, and cared little about the Jew, for that matter, only that he cannot be dismissed as exemplar of the well-known historical disgrace. Both figures needed more particular curves and high notes for this piece to work as drama of character. At least that is how it apparently wanted to present itself–two people at opposite sides of the stage talking to each other only through letters read aloud. As is, instead, it resembles a mildly dramatized history lesson.