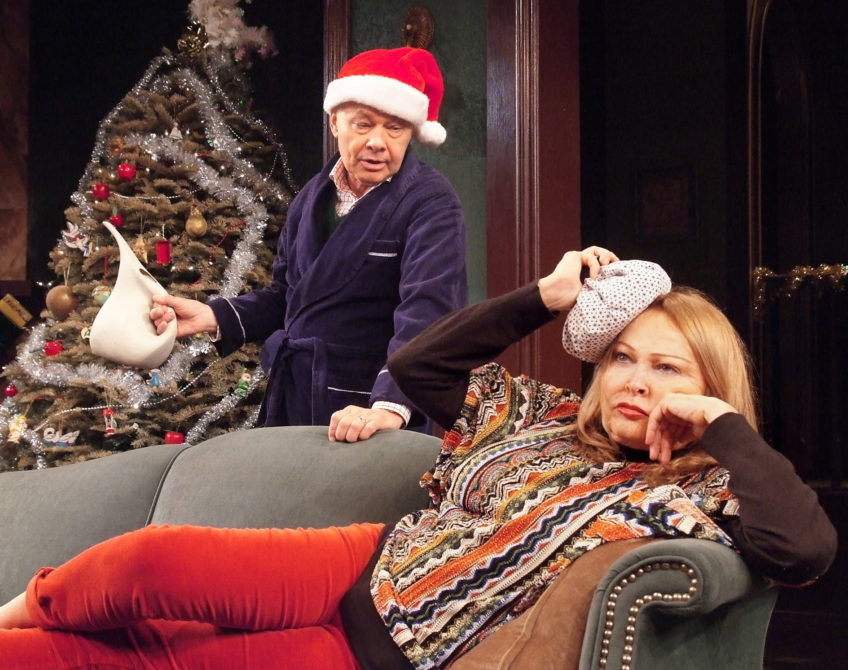 Affluence is a major issue in American society today — a few people have a lot of it while a lot of people have none and probably never will — so it’s not surprising that some playwrights are drawn to the subject.

In this play, Steven Peterson wonders what a once-affluent family will do to regain its lost status and privileges as a result of Dad’s losing his executive banker job, Mom’s addiction to pain killer medications, Daughter’s impending start at an upscale college and Son’s fecklessness. And then there’s Grandmother’s rapidly failing health and her caregiver’s steadfast and kind attentions.

Grandma — nicknamed “Namoo” (Nan Tepper) by her granddaughter and grandson — and her wealth are the hinges upon which the shutters of this storm-battered house bang and clatter.

Upon her death, which seems imminent, her son Robert Woodley, Jr., (Lloyd Pedersen), daughter-in-law Jean (Rhonda Lord), granddaughter Beanie (Ilona Kulinska) and grandson Arthird (Justin Huff) stand to inherit $12 million. But there’s a catch: Namoo has to shuffle off to Buffalo by the last tick of the clock on Dec. 31, just a week away. Otherwise, the government will scoop $4 million in estate taxes off the table, leaving the Woodleys with only $8 million.

Only $8 million, indeed. But it so happens that that’s exactly what they owe to the entity known as Various & Sundry, prompting dad, Robert, Jr., to note disconsolately that zeroing out their indebtedness would also leave them financially where they were just three years ago: at zero. Oh, if only Namoo would do the right thing, an exasperated Jean cries out to her husband, and just go gentle into that good night before New Year’s Eve and leave the entire $12 million to them.

And also bequeath Namoo’s stash of prescription narcotics to her, Jean, alone — not that she hasn’t been stealing pills from the elderly, ailing woman all along, despite the efforts of caregiver Inez (Christine Uhebe) to prevent it. Dad is aghast that his wife would even think of snuffing his mother but as time moves inexorably toward midnight, December 31, he seems to be reconsidering his options. He has a long discussion alone with Inez on the hazards of someone who’s slightly sedated, inadvertently slipping into over-sedation. That, of course, is widely thought to have been the cause of Marilyn Monroe’s death from an overdose of barbiturates and, while not mentioning the actress by name, he explicitly repeats the sequence with Inez again. “Do you understand?” he asks. Solemnly, she nods assent.

I won’t give away the ending of “Affluence” — but I was reminded of two of the late James Thurber’s short stories, “The Unicorn in the Garden” and “The Catbird Seat.” You might look them up.

The cast — Pedersen, Lord, Kulinska, Huff, Uhebe and Tepper — are all experienced actors and performed appropriately. I found Eisenberg’s direction to be slow, as if the audience might miss some significant step along the way. It also grew tiresome for the Kulinska and Huff characters to object, loudly and repeatedly, to their childhood nicknames: “My name is Barbara, not ‘Beanie’!” she screamed; “My name is Rob, not ‘Arthird’,” (‘R’-third, get it?) he shouts. It added little to the story other than accentuating their adolescence. Peterson won the Beverly Hills Theatre Guild’s 2013 Julie Harris Playwriting Award for this play. I wondered if he reflected on the irony of the world premiere of “Affluence” occurring in Beverly Hills. BH, after all, is about as affluent a ‘nabe’ as can be found in America.