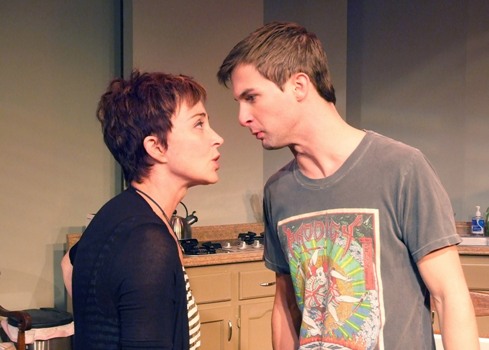 The subject of suicide takes on added dimensions when the act is committed by someone close to you. Elliot Shoenman, author of “AfterMath,” knows this all too well, as his own father committed suicide 45 years ago when Shoenman was 18. In his own words, “the scars remain.” The depth of the scars and width of the ripples of devastation extend far beyond the generally self-focused thoughts of someone planning to kill himself.

Neither “I can’t take it anymore,” as it says in the note left by the father who has killed himself in “AfterMath,” nor “they’ll be sorry,” which is another frequent thought of a potential suicide, shows insight into the depth of anger and confusion that flow in the wake of the act itself. It is not simply an action one takes against oneself.

“AfterMath” takes place three years after Julie’s (Annie Potts) math professor husband has jumped from a bridge, leaving her with 16-year-old son, Eric (Daniel Taylor), and 22-year-old daughter, Natalie (played seamlessly by understudy Danielle Doyen, who stepped into the part in the performance covered here). The full text of her husband’s note, projected on a screen above the set of Julie’s apartment in Queens, is: “I can’t take it anymore. Take care of the kids and sell the car.” No, “I’m sorry” or “I love you,” as Julie bewails several times. It is a brief note of belittling and controlling orders.

Reading this far, your thought is probably “Whoa, that play is a complete downer.” But “AfterMath” is not. In fact, if there is a problem it lies in the fact that Annie Potts, an accomplished comedic actress, plays her role too much for laughs as though it were a television sitcom, territory where she is a pro. Julie is the street smart, sassy, brassy New Yorker, masking her insecurities by putting everyone around her on the defensive. Potts milks every ironic irreverence and, despite her petite size, delivers whopping zingers against the more nuanced acting of Daniel Taylor, Danielle Doyen, and Michael Mantell (playing Chuck, her husband’s best friend, a lawyer who, to her children’s dismay, has hung around since their father’s suicide, helping out their mother).

To be honest, it seems I am a lone voice in this criticism. “AfterMath” has just moved across town to the Matrix from the Odyssey where it enjoyed a very successful run with great critical reviews. But I will stick with my point of view. It is not the writing.Playwright Shoenman shows genuine understanding of the kind of complexity in family dynamics that can seem almost funny viewed from the outside. The suicide of a family member only intensifies what has existed in the first place. Love and neediness can be brewed together, creating suffocation and anger, as is easily seen in the other actors’ more muted performances. Why Taylor would choose to direct Ms. Potts as though she were in a TV sitcom is a mystery to me unless it is because he expected he would draw some folks to the theater who have been her fans from her role in “Designing Women.” Perhaps he hopes they will come for the laughs, and maybe they will. A more sophisticated audience might appreciate a more subtle interpretation.

It would be interesting to see “AfterMath” again with a different lead and different direction. Humor is one of the “healthy” defensive mechanisms. Played straight, Julie’s humor could be more than mere gag lines. She claws at her family in her neediness—and her denial of same—but there might be something more than complete neuroticism that keeps them, and old friend Chuck, from simply turning their backs.