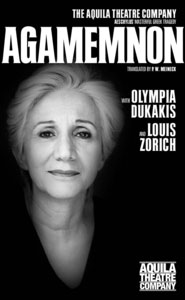 The play should have been called Clytemnestra if Aeschylus had consistently followed his own treatment of the Greek myths about the Trojan wars. The interest and the drama, not to speak of the audience&#146;s attention, center on her (Olympia Dukakis) not him (Louis Zorich), the Great King of Kings who led the Greeks against Troy.

Clytemnestra approaches a Chorus of Old Men to report the astonishing news of the Greeks&#146; victory; Agamemnon arrives and she kills him off as soon as he sets foot on home ground. To be accurate, as soon as he treads on the red carpet she lays out for him, a brilliant blood red pathway leading to her door. Any man might have suspected danger at the sight of that scarlet ceremony, as he does, for all his arrogance. He drives up in his modern chariot (a jeep), accompanied by his lovely Trojan prize, Cassandra (Miriam Laube), and rejects his wife&#146;s welcome with that "purple tapestry." He is neither a "god," nor a "barbarian chieftain," he says, dismissing the plans she "has laid for many years for his return." Finally, with strong misgivings he agrees to walk on her carpet if she will accept his trophy "stranger." Zorich then moves onto the carpet, but more mechanically than fearfully, as he might have, given the portents.

Cassandra, through all this, sits in the car silently, motionlessly until, taunted by Clytemnestra to "say something." She then speaks her prophetic words telling that the Greeks will not enjoy their victory. But it is her fate to be disbelieved. And Clytemnestra kills her as if executing an enemy alien for the state instead of murdering the "other woman."

That is all that happens in the play&#146;s simple action, every moment of which is mesmerizing in this production by the Aquila Theatre Company. Dukakis&#146;s opening lines sound rather weak&#150;conversational and pleasant&#150;whereas the excellent Chorus on stage well before her entrance had already established the poem&#146;s strong rhythms and cadence of lament. Soon revived, however, Dukakis proved once again that she is at the top of her game. Her tale of signal fires moving across Greece brings the Chorus to astounded attention, never relaxed either throughout her long description of jubilant Greeks and suffering Trojans at Troy. Typically, Aeschylus paints the enemy and their city sympathetically&#150;reminding us that he wrote Persians entirely from the anti-Greek point of view. Here, in ten lines of Dukakis&#146; longest speech, she hopes the thrill of victory will not lead the Greeks to rape and plunder.

Dukakis refrains from tilting the play toward possible gender implications, although the elements for a feminist stance are there. Justifying herself to the Chorus, Clytemnestra names her grievances in the male world that victimizes her: enraged mother whose child was sacrificed to calm a storm inhibiting the Greek fleet; outraged wife confronting another of her husband&#146;s concubines. Her initial demeanor instead is calm and soft as the rosy colored gown she wears, suggesting a maternal persona far, far from murderess. It seems to deceive Agamemnon–King, husband and father–about her motives. She then pulls out all stops for her "killer" speeches. The First and Second Choristers suspect she has "gone crazy," ask if she is "on drugs" in the sometimes slangy vocabulary of the translator, Peter Meineck. The currently standard version by David Slavitt phrases it differently: "Has the bloody deed/unsettled your mind, perhaps? Is this stress-related?" Here the mixed diction of psychotherapy strikes an equally odd note.

The men sound as good as they look: in grey suits, top coats and fedoras, perhaps last seen on stage when worn by newspaper reporters in The Front Page. Could the designer have intended such an association between kinds of reporter? Aegisthus (Marco Barricelli) wears the thug&#146;s version of male business dress: a white double-breasted suit, dark shirt, and shiny tie. His smooth walk seemed barely to contain violence.

Minor flaws in the production&#146;s visuals were the Chorus&#146;s uncoordinated movements, intended, it would seem, to be balletic and Clytemnestra&#146;s big, blonde wig, looking like a remnant from a Dolly Parton gig.