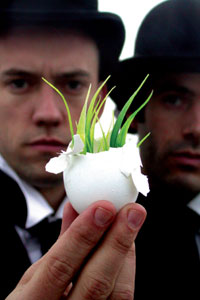 (l to r) Trey Lyford and Geoff Sobelle star in all wear bowlers, a hilarious, vaudeville hit at Berkeley Rep for the holidays.

So, who wears a bowler? Chaplin, Laurel and Hardy, Abbott and Costello – right? And, in a sense, all of us. No matter how sophisticated you may be, face it, there are times when you play the fool, trip over your own feet, find yourself in a crowd of strangers and wonder how you got there. That’s about all the meaning you’re going to get out of the laugh-filled entertainment playing at Berkeley Rep through Dec. 23.

“all wear bowlers,” the inventive brainchild of actors Trey Lyford and Geoff Sobelle, is silly, slapstick and consummately performed; a perfect antidote to holiday stress. Just don’t look for the deeper message. There ain’t one.

Lyford, based in New York, and Sobelle, out of Philadelphia, have toured this show across four continents, garnering applause, a New York innovative theater award and a Drama Desk nomination. They acknowledge a debt to Samuel Beckett and, indeed, “bowlers” is a little like “Waiting For Godot,” absurdist, surreal but without the angst. And it’s a lot shorter.

The plot, such as it is, is simple. Two guys (Lyford and Sobelle) named Wyatt and Earnest, respectively, are lost, walking down a deserted road in a scratchy old black and white movie Suddenly Earnest steps from the screen onto the stage. Astonished at seeing a house full of people staring at him, he flees back into the movie, and out again, and back (positively brilliant filmmaking by Michael Glass). Finally, both are flung onto the stage and, when they try to escape, are prevented by barking dogs and bedeviled by police sirens before running, literally, into a brick wall.

The next hour or so of this brief offering is spent trying to make some sense of the situation and then disprove the old adage: “You can’t go home again.” Both actors have wonderfully mobile faces, Sobelle being the “brains” of the duo and Lyford, the nice guy – until he unleashes his Godzilla imitations. Inspired foolery involves a few ringers from the audience, an incredible number of eggs, at least as many pratfalls, minimal dialogue and maximum hilarity. (In case you are thinking of bringing the kids, be warned that there is liberal use of the “F-word” and some tasteless jokes, including one about cancer; then go ahead and bring them anyway).

One wonderful bit spoofs ventriloquism. Another skewers romance. And, eventually, the house actually comes down – all over the stage, revealing the backstage innards. The lighting (Randy “Igleu” Glickman) and sound (James Sugg) cues are complicated and right on target. The technical side of this show is nothing short of amazing and stage manager Michelle Blair should take a bow at the end. Of course, there is no justice in this world and she doesn’t.

But, in the tradition of happy endings, Wyatt and Earnest manage to slip back into their movie, somewhat battered and not much wiser than before. And everybody else puts on their coats and hats – bowlers or not – and heads for the exit, a little happier than when they came in. Hey, how much more can you ask for?