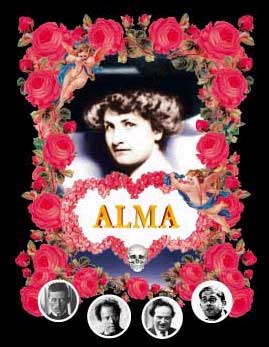 Alma Mahler not only (sequentially) married the composer, Gustav Mahler, Bauhaus founder Walter Gropius and novelist and poet Franz Werfel, but she was a lover or romantically connected to painters Gustav Klimt and Oskar Kokoschka, composer Alexander Zemlinsky and theater director Max Burchard.After Gustav Mahler contacted Freud for a consultation about his troubled marriage and impotence, the good doctor himself beat a path to her door.And there. were others.&#147;Nothing tastes better than the sperm from genius,&#148; sums up her love life.At Mahler&#146;s demand she forfeited her own promising career as a composer when they married, never again to resume it.

Joshua Sobol’s play, Alma, was first produced in Vienna and originally planned for only a few performances. It ran for seven straight seasons. The production has followed the trajectory and geography of her life moving through Europe and on to America. In Europe Alma was staged in historic venues such as the 17th century Palazzo Zenobio in Venice and a 17th century monastery in Lisbon. Fleeing the Nazis, Alma and Werfel came to Los Angeles where Werzel&#146;s Song of Bernadettewas made into a movie starring Jennifer Jones.In 1945, after Werfel&#146;s death, she left Los Angeles for New York.

It is fitting that the magnificent Los Angeles Theater Center was chosen as the venue.Built as the last, great, movie palace of the 1930&#146;s, few current Angelinos have been inside to see the spectacular French Baroque auditorium, lobbies, and ballroom or to hear the splendid organ. Truly an architectural heritage site, ranking comfortably with any grand European opera house, the Los Angeles theater, in all its original glory, has been lovingly preserved by the Los Angeles Conservancy.The theater’s architectural detail is fully and creatively incorporated into the action. Alma is an experience greater than a traditionally staged drama.Arrive a bit early, dressed for a party, and be greeted with a glass of port and invited to lounge in the elaborate eight story lobby.

Heralded by magnificent chords from the organ, a well preserved, Alma Mahler Werfel (Flo Lawrence) descends the grand staircase and offers an expansive welcome to her 125th birthday party. Three different 22-year-old Almas, (Ryan Templeton, Tiffany Elle, Maria Vargo) each pretending to be the real one, interrupt her competitively trying to tell their stories, and Mahler (Magnus Stefansson), Gropius (Hans Hoffman), Werfel (Anthony St.Martin) and other lovers are quickly drawn in.Time slips fluidly between the commentaries of the present and bits of the past.

In a crowd one rarely hears an entire conversation; in life one cannot follow another person every moment.Alma invites the audience to &#147;act as a camera&#148; and follow different characters to different locations, from different angles, moving around the magnificent building from basement, to auditorium, to balcony, and back stage. For some of the audience this includes going on to a bus (parked in an alley behind the theater) to take an actual &#147;imagination&#148; tour (led by Werfel, on their honeymoon, trying to convince the pouting Alma that Palestine is a wonderful place) through several blocks of this seedy Los Angeles neighborhood full of other magnificent ghost buildings, knowing that somewhere else something else is happening to someone else in the drama.

As in reality, no one observes the complete picture, pieces of dialogue are lost as actors rush through a room.In a bedroom (foyer of the first balcony), two of the three young Almas compete with one another and are passionately entwined with their lover, Gropius, who alternates between voracious lust and equally voracious curiosity as to how Mahler has just died. In scenes such as this the device works magnificently. Occasionally melodramatic, Alma always is interesting.

Unifying scenes that all the viewers observe insure that the audience advances along through the story as Mahler&#146;s music resonates through the theater&#146;s rich sound system.Examples include the birthday party at the beginning; Mahler&#146;s funeral in the elaborate auditorium, cum cathedral, before intermission; and his funeral feast where all are invited to partake in the mirrored ballroom below the theater for the interval.Beautifully set tables await; a three course Austrian banquet with more wine is served. Actors remain in character.This is more than dinner theater.Act two begins with Nazi guards hurrying the audience away from the tables to begin a journey.After an all too real scene of Alma and Oskar&#146;s abusive relationship, it culminates with the insane, besotted Kokoshka creating a life sized puppet of Alma and dancing with her in a mad masked ball.

The three Alma design allows for a diversity of perceptions and realities, more so than would a straightforward dramatization of a biography.In this exciting but sad story of a woman whose fame andidentity existed solely in her sexuality; the fantasy is better than the reality.Alma entertains and amuses. It informs, perhaps mostly about ourselves.