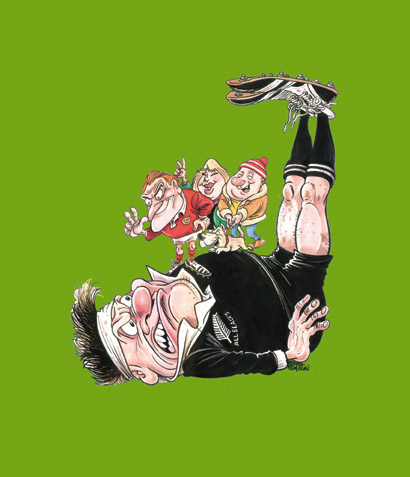 In 1978 the New Zealand All Blacks rugby team toured Ireland. They had already demolished national and regional sides from all over the British Isles and seemed unbeatable. On October 31st they met Munster, a provincial outfit made up of players from clubs in the west and south. The All Blacks looked set to add another annihilation to their perfect record but, as legend would have it, the unthinkable happened. On that Autumn afternoon in Thomond Park, not only did Munster defeat the All Blacks, the latter did not even score, which had not happened in decades. A stunned local crowd watched the match which playwright John Breen describes as "the last great folk memory." It was not even televised. It was the finest moment in the history of Irish rugby, and only a few thousand people saw it first hand. All that remains of it now is the mythology.

Breen&#146;s play is a tremendously funny and energetically mounted homage to that frozen moment in folk history. He sets up the David vs. Goliath premise which is instantly comprehensible, and then swiftly introduces a broad range of colorful personalities with whom almost everyone will empathize. These include players on both sides, fans from various social classes, and even a group of children who are not at all interested in the proceedings (based on Breen&#146;s own childhood experience: he was busy building an enormous bonfire to celebrate Halloween and did not attend the match).

This is the kind of play most easily described as "well-observed". The author has taken the basic facts of the situation (and the sense of myth which surrounds it) and created a set of characters and situations which dramatize and illustrate the emotions it inspires in memory. There is enough recognizable action on stage for even the uninitiated to understand exactly what is at stake at all times and the characters are all quite vivid.

The characterizations are broad and largely comic, yet each of the multiplicity of mini-dramas in which they are involved produces its observational gems; from the eternally pessimistic Munster fan who becomes more paranoid with each score (fearing another in a long line of historic Irish defeats from the jaws of victory), to the strange fate which befalls the leader of the gang of children intent on making their bonfire the best in Limerick city regardless of the cost.

Alone It Stands makes no great claims for profundity (although it does add a somber note with the real-life death of the father of Munster captain Donal Canniffe during the match). The themes are simple and the aim is clearly to entertain. This is a familiar genre and Breen has merely dressed it with a nice set of Irish colors. For aficionados of the sport, the author&#146;s in-jokes and his grasp of the tactical complexities of the game adds another level of enjoyment.

A cast of six play all of the roles, which requires an enormous level of physical performance. A scene of gameplay mayhem abruptly transforms into a dramatization of the birthing of twins by the wife of a rabid fan. A group of surly New Zealand rugby players suddenly becomes a troupe of singing comely maidens at Bunratty Castle. A quiet, reflective moment in a chapel switches to a post-match sing-along in a rowdy Irish pub.

Arguably the sheer amount of cross-cutting makes the play more cinematic than theatrical (indeed, one can easily see a very saleable screenplay emerging from it), but the physicality of the live performance makes it sometimes akin to dance, and as such has been expertly choreographed. The production succeeds in creating a sense of the excitement of a live sporting event and has fun mimicking filmic effects such as slow motion. It also mixes large scale and more intimate action, making good use of the stage space and lighting. The pace is superb and the laughs come thick and fast, but the audience never misses a dramatic beat in any of the stories. It builds to a fitting climax, rounds out with a satisfying set of resolutions and ends with an hilarious punchline. Breen received an Irish Times / ESB Irish Theatre Award for best director for his work.

All of the cast are good, but Malcolm Adams registers the greatest variety of characterization in his various roles (including the dictatorial New Zealander coach, Irish sporting legend Tony Ward, and a well-to-do Corkman who gets roped into the post-match festivities with more blue-collar compatriots). Irish Theatre Award nominee David Pearse is also notable in many of his parts, particularly the earnest but hapless fan who assures his pregnant wife that no child of his would be inconsiderate enough to be born during the game.

Alone It Stands has all the makings of a production which could run and run (so to speak), and looks likely to become a feature on the amateur/touring scene for some time. It is worth catching the production at the Gaiety right now though, which may become something of a folk memory itself.