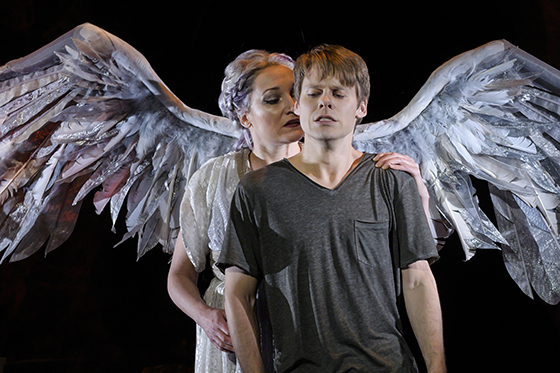 It’s difficult to see Berkeley Rep’s impressive and astute new production of Tony Kushner’s Pulitzer Prize-winning two-part epic, “Angels in America: a Gay Fantasia on National Themes,” without revisiting the early days of AIDS in the San Francisco Area, when people were dying terrible deaths and few in the general public, not to mention, in our government, seemed to care.

Yet, from the hindsight of 2018, and the far-reaching improvements in the treatment of HIV and the hard-won gay rights in the United States, we have a greater appreciation of the importance of the work, from the dramatic appearance of the angel at the end of “Part One: Millennium Approaches”, to the optimistic message at the epilogue of “Part Two: Perestroika.” Now with the passage of time, one can also more easily appreciate the humor and more general social and political commentary in the plays, which reflect a poignant picture of the 1980s and 90s.

Director Tony Taccone, who has enjoyed a deep history with “Angels in America,” having commissioned Tony Kushner to write the epic, and having directed the initial production for San Francisco’s Eureka Theater in 1989, delivers a cohesive, meaningful and memorable production, aided by a marvelous cast and a wonderful production staff. This version is the best one I have seen. It has a greater intimacy, as well as a more cohesive flow and rhythm. Perestroika has been shortened a little, although a few of the speeches could be edited a bit more without compromising plot or message.

The plot of “Angels in America” involves two interrelated couples living in New York City in 1985. One is a gay couple, Louis Ironson (first-rate Benjamin T. Ismail), a Jewish political-junkie word processor-typist, and Prior Walter (superb Randy Harrison), from an old WASP family, who tells his lover at the start of “Millennium Approaches” that he has AIDS. The second couple are an apparently heterosexual Mormon couple, Harper Pitt (outstanding Bethany Jillard), who suffers anxiety and hallucinations, perhaps from overusing valium after a miscarriage, and Joe Pitt (terrific Danny Binstock), a conservative Republican lawyer, who, at the start of the first play is coming to grips with his closeted homosexuality.

And just as Roy Cohn, notorious, ruthless lawyer and fixer, secret homosexual, and infamous McCarthy House Un-American Activities Committee attorney, is back in the news as Donald Trump’s former attorney and role model, he reappears as a character in “Angels in America.” Cohn, for his own purposes, wants to help Joe secure a position in the Justice Department in Washington. He is brilliantly played by Tony award-winner Stephen Spinella, who captured the role of Prior on Broadway for almost five years. But it’s unfair to single out Spinella for praise since the entire cast is uniformly special, including Caldwell Tidicue as Belize, a male nurse and Prior’s friend.

In addition to the earthly story in “Angels in America,” there is the cosmological one involving an angel who visits Prior (played by Francesca Faridany or Lisa Ramirez). She explains that God left heaven on the day of the 1906 San Francisco earthquake; ever since, the angels are alone and directionless. The angel’s cure requires humans to end their addiction to change, forward movement, or as she calls it, their migratory tendency. This concept is an anathema to Prior, who, in “Perestroika,” pleads to the angels for their blessings and for life. This plea for forward motion, for life and change, is one of the many significance messages that Kushner conveys to his audience.

“Angels in America” is a seven hour attention-grabbing experience. Each play is approximately three and one-half hours long and has two fifteen-minute intermissions. So, if you see both parts on one afternoon and evening, you will have a lot to absorb, but you will have the full, albeit prolonged, experience in one day. Attending the two parts separately will be easier for most, but the separation of the two parts lessens the intensity a bit. Whichever way you choose, please make sure you see this vital and significant contribution to 20th century theatre.

This review originally appear on Berkeleyside.com