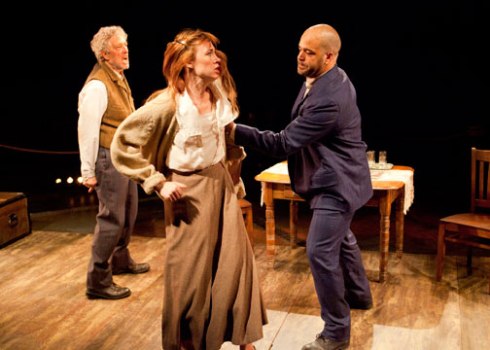 Bad life decisions—they can lie inert in the past or haunt us for years. You already know which happens in Eugene O’Neill’s “Anna Christie.” Set on the northeast coast, the play explores two sailors’ love/hate relationship with the sea—and pretty much everything else they encounter.

Chris Christopherson (Bill Buell) is an old, garrulous sailor. He is kind, sensitive, opinionated, confused and amiable even when angry. Old Chris, in this production, is basically Swedish Tevya. Back from a run on his coal barge, he’s at the saloon with his lady friend Marthy Owen (Kristine Nielsen), when he receives a letter from his daughter Anna, who is coming to New York from Minnesota. He hasn’t seen Anna since she was a little girl. The sea kept him away.

Anna (Jessica Love) is a coarse, street-smart young woman with no prospects. When Marthy asks, “Do you know who I am?” she responds, “Me in 40 years.” She’s joining her father because she has nowhere else to go.

The two develop an understanding until shipwrecked sailor Mat Burke (Austin Durant) arrives at the coal barge. Burke is a larger-than-life Irishman who takes an immediate liking to Anna, much to old Chris’s annoyance. From then on, sparks fly.

Without question, the production soars with the performances of Buell and Durant. Buell endows every line with his character’s iconoclastic style—squeezing out laughs that even O’Neill probably never foresaw. Durant plays Burke as a ginormous ball of rage, walking the razor-thin margin between passion and melodrama and somehow staying on the right side. And, as a side note, if he’s not an Irish citizen, he should be. By comparison, Love seems miscast as Anna. She’s like a teetotaler experimenting with strong spirits.

The set evokes the weathered decay of any seaport, and the set change between Acts I and II is itself a work of art. Goldstein’s direction is nicely paced and thoughtful, comfortably developing the characters and then setting them upon each other.

For the most part, “Anna Christie” is the complete package: amusing, at times riveting, always thought-provoking and even topical during a very strange political season. O’Neill would be pleased.