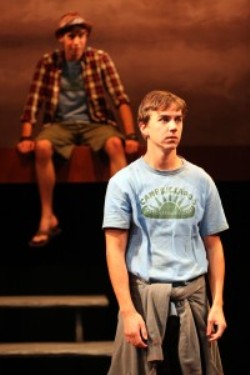 Ah, there’s no place like home: especially if you’re a misunderstood, maladjusted teenager or his obsessive Jewish mother or the father who has put success before life and now hears Time’s winged chariot drawing near. Anna Ziegler’s compact little play, “Another Way Home,” having its world premiere at Magic Theatre in San Francisco, is a smart, funny and deeply poignant coming-of-age story with the parents growing up as much as their kids. Directed by Meredith McDonough, formerly of TheatreWorks and returning home from her new post at Actor’s Theatre of Louisville, it features spot-on performances from an excellent ensemble cast.

Joseph (who prefers to be called “Joey” but his parents won’t), defiantly played by Daniel Petzold, may have ADD but he may not. He’s on Ritalin and Lexapro, just in case. He is socially inept and has trouble with authority. So his New York Upper West Side parents ignore him (the father), smother him (the mother) and send him off to summer camp, just like all the other kids. But when they arrive at Camp Kickapoo in the Maine woods for Visiting Day, a quarrel erupts and Joey/Joseph takes off. Most of the rest of the 80-minute play is spent trying to find him. Everybody is searching; “He’d never been so popular,” his mother muses.

In the process, Lillian (Kim Martin-Cotten, a wonderful actress who is a dead ringer for Annette Bening) questions the choices she has made, both in her marriage and her mothering. Philip, the father (a sympathetic Mark Pinter) begins to wonder where his life went while he was busy doing his job. They love their kids — Joey and his sister, the Taylor Swift-obsessed but otherwise perfect Nora (Riley Krull) — but it’s not always easy. They love each other but that can be even harder on a bad day, and this is a really bad day. Rounding out the cast is Jeremy Kahn as Mike T., a young counselor who never had much of a family of his own and decides to borrow Joey’s for a little while.

Ziegler writes well, with an ear for vernacular, and the play is narrated by the parents, as though they were telling the tale to friends at a dinner party, between stretches of dialogue. Much of it is very funny, in spite of the seriousness of the underlying emotions. There is no set to speak of, just some lighted squares on the floor, a window and a ledge that serves as a bunk, while Annie Smart’s costumes are casual correct.

Eventually, the lost is found but, in a deeper sense, what has been lost can never be retrieved. Innocence, illusions and the belief that you have been doing the right thing all along so how did it turn out so wrong? Just your typical American family. You may even recognize it.