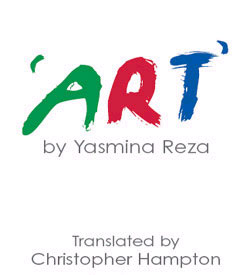 There are few "small plays" that stay with the audience as well as Yasmina Reza’s Art. Ten years ago, when this French play first appeared in Christopher Hampton’s translation at the West End, the stellar cast consisted of Albert Finney, Tom Courtenay and Ken Stott. And yet, the memory – which compelled the viewer to return to the London production, and then see it at the San Jose Rep and wherever else it appeared – is of the play, not of the actors.

And so it is now. The Playhouse production in San Francisco boasts a fine cast, but once again the evening is riding on the strength of the writing. Director Robin Stanton wisely stays out of the way, not Directing with a capital D, just keeping the minimal action going in a properly minimalist way.

Reza was 35 when she wrote Art, a newcomer to the theater, with an exotic background: an Iranian Jewish father, born in Moscow, who married a Hungarian violinist in France. Reza grew up in Paris, surrounded by artists, musicians, actors and directors. From that environment came Art, a play that’s really about people, albeit by way of a plot inspired by the cultural/commercial craze over modern art in the 1980s.

One of three long-time friends (a curiously stiff Bill English at The Playhouse) pays an outrageously high price for a "painting" of white lines on a white canvas. The entire play (in one, 85-minute act) consists of conversations between the three over the value – commercial and personal – of the white object in question. Mark, the hilariously alpha male/alpha personality of the trio (Louis Parnell, in the evening’s most dynamic performance), and Yvan (Keith Burkland), the sympathetic schlemiel, take on Serge, the buyer of the painting, and each other. The three men spout learned quotes at times, then sound like egomaniac teenage girls, settling down at the end to wisdom and acceptance – but without a false note.

Fluently, effortlessly, in a surprising and most entertaining way, Reza brings into play issues of friendship, loyalty, the difficulty and value of telling the truth. In stark, glorious contrast with plays weighed down by the visibly manipulative, the insultingly obvious, Art never gets artsy, cute or predictable. On the contrary, it respects the audience to the degree that at a crucial moment it refers to a quote by Paul Valery, but the source is not given. ("There is no truth without passion, without mistake… truth can only be achieved passionately.")

Fear not: there is no soapbox, no lecture, no heavy-handed making of points. In fact, points are not made at all; you can arrive at conclusions on your own, if you wish, or just sit back and enjoy the ride. It is a quick and yet substantial journey of a dialogue that often doesn’t sink in until minutes later (with an initial laugh and a followup smile), providing the actors with easy doubletakes and piquant delayed reactions, while the text appears as several major fugues of variations on the interweaving themes of Art.

Then, to top it all off, there are the olives (fully equal to the pivotal sardines of Michael Frayn’s Noises Off). After a major, embarrassingly personal outburst by Yvan, the pause that follows is taken up by a dish of olives and the disposition of the pits – it is brilliant shtick that’s both burlesque and something speaking to a situation in which no overt speech is feasible. This and other confident uses of the most difficult and powerful device in the theater – silence – would normally characterize an experienced playwright at the zenith of a career.