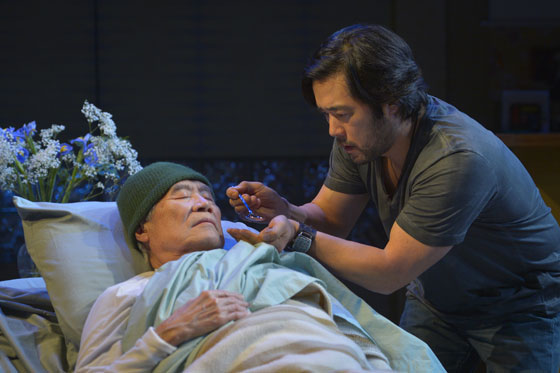 Can a bowl of soup really save a life? Probably not, but it makes for some interesting speculation in Julia Cho’s “Aubergine,” a play about love and death, estrangement and reconciliation, immigration and assimilation and, most of all, food, developed through and having its world premiere at Berkeley Rep.

A skilled cast, deftly directed by the theater’s artistic head, Tony Taccone, serves the meal on Wilson Chin’s sleek multi-purpose set that transforms seamlessly from hospital to home, restaurant to a verdant cemetery in Korea. The players all are very good. And so is the play, with one problem. As with many a banquet — and this is a veritable feast of words — there can be too much of a good thing. Cho works out her ideas and then works them out again, and yet again. The play could be cut by half an hour or maybe more.

She is, however, a beautiful writer. In the beginning — sort of a prologue to the main story — a character named Diane (Safiya Fredericks), who will not appear again until the very end, a self-proclaimed foodie, rhapsodizes about her “gastronomic gallivanting,” describing “the sublime on a platter” and a bread crust that “shatters in my mouth.” It is as much an introduction to the poetry of Cho’s language as to the play.

There is a surprising amount of humor in “Aubergine.” I haven’t heard so many laughs in a show where a deathbed sits on the stage since “The Lyons.” And that’s a good thing, diffusing the inevitable sadness of loss and underlining the end of life as a part of life. While a father ((a mostly silent Sab Shimono) lies supine on that bed, life goes on around him. Ray, the rebellious son, a chef who has lived his life at arm’s length from his taciturn and critical dad, has returned home to care for his father. He is a devoted, if confused, caregiver, and Tim Kang plays the heck out of the part.

If Ray is the lodestar of the drama, three interesting characters orbit around him, providing a lot of the humor, which is a good thing because Ray, like his father, is dour and essentially humorless. The first is Lucien, the hospice nurse (a wonderful Tyrone Mitchell Henderson). The second is Cornelia (the lovely Jennifer Lim), Ray’s neglected girlfriend. Last to arrive on the scene is Ray’s uncle (Joseph Steven Yang), the dying father’s long-estranged brother, who flies in from Korea and speaks nary a word of English.

Some of the most hilarious parts of the play are the exchanges between Cornelia, who speaks fluent Korean and the uncle — translated on an overhead screen — an object lesson in what we mean and what is understood. It is, however, something of an imitation of the hit play “Chinglish.” In the end, all comes right but it’s a little pat — reminding one of the recent film “The Hundred Foot Journey,” where it was done a bit better. But it does provide a happy ending to what is, essentially, a pretty sad tale.

And a nice cup of Peet’s coffee would round out the “Aubergine” banquet of words. That is, if you are not already stuffed.