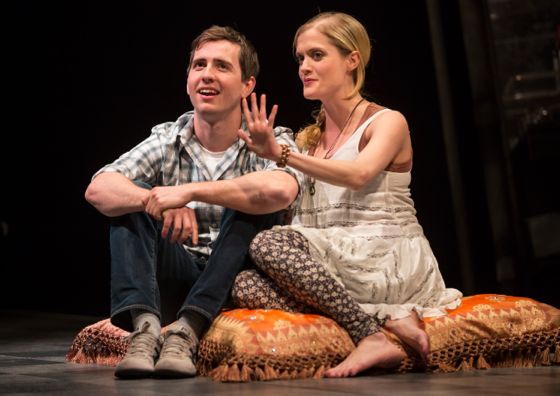 Seth Bockley’s new play, “Ask Aunt Susan,” is a smart, funny 90-minute tear through today’s era of digital connections and a”cri de coeur“ for a slower pace and a little more humanity in our personal relationships. Or is it?

As the play opens, multiple video screens assault us with existential questions: “Are you lonely?” “Are you sad? Afraid? In debt? Obese?”

An anonymous young man (Alex Stage), immersed in his laptop, sits in a diner consuming coffee and creating content and code. His company has been found guilty of defrauding Yelp with fake user reviews (for a price, of course). His girlfriend Betty (Meghan Reardon), an aspiring actor, is interested in learning “to radiate love,” not so much in technology.

The young man’s boss, the manic Steve (Marc Grapey), as a joke, tells the young man that he wants him to start writing an online advice column as Aunt Susan. Young man answers a few messages in a corny, affectionate, greeting-card style. They’re posted on an Ask Aunt Susan community site, and traffic quickly increases. Young man feels the power of his words and becomes Aunt Susan, reveling in his ability to help people overcome their problems and grief. He’s famous, but he wonders, “Anonymous fame? Is that even a thing?”

Traffic and interest continue to bloom and Aunt Susan’s email box is beyond capacity. But Aunt Susan still answers every message himself. Crowing about their success, Steve says, ‘Remember that movie, “The Social Network?” I’m Justin Timberlake and you’re that Facebook guy.”

At one point, Steve decides it’s all too much and gives it up, getting rid of his devices. But that doesn’t last long. The lure of the web and his community of fans draws him back.

The Ask Aunt Susan website is thriving; it earns pennies for each click, and the pennies add up. Steve’s wife Lydia (Jennie Moreau), the glamorous business strategist, decides their success means they can move away from the simple community model to “Ask Aunt Susan 2.0”—a subscription model that will“crowdsource” Aunt Susan’s responses. Soon they surpass one million active subscribers and, much to Aunt Susan’s distress, new Aunt Susans are hired all over the country to keep up with the message traffic. Steve revels in the merch shop, where he can sell Aunt Susan mugs, t-shirts and books. The headquarters and the server farm are moved to Denver and so is the real Aunt Susan, where he finds a comfortable diner to hang out in.

Everything crumbles eventually. Steve and Lydia leave Aunt Susan a message to say they’re crashed the server farm and sold the database of six million subscriber names and data. They’re on the way to South America or maybe Asia.

A number of subplots are part of the show, including Lydia’s attempt to seduce Aunt Susan, and his effort to maintain his relationship with Betty. A ditsy subplot about a fan trying to unmask Aunt Susan should have been left on the cutting room floor.

The ending finds Aunt Susan and Betty trying to find a way to get back together.

Henry Wishcamper’s direction is crisp and smooth and he has some strong performers to work with. Robyn Scott does an excellent turn as bartender and diner waitress. Marc Grapey is a funny, fiendish, venal Steve, perfectly cast as the money-grubbing capitalist who never misses a chance to have fun. Jennie Moreau is a perfect foil as Lydia—graceful, elegant and brutally serious about business. Meghan Reardon as Betty is a dreamy, sentimental young woman, who is out of tune with her boyfriend’s tech addiction. Alex Stage’s performance as Aunt Susan is the performance that I found lacking. Yes, he’s supposed to be a nonentity, intent and even obsessed with the internet, and then with his role as the advice guru. I found his performance to be a little too laid back.

The story is drawn from Nathanael West’s 1933 novella, “Miss Lonelyhearts,” about a newspaper advice columnist, an anonymous young reporter who came to be subsumed by his identity as Miss Lonelyhearts. Playwright Bockley started with the West story as his model, but the play took on a life of its own. It was workshopped at the Goodman Theatre in 2011, then revamped for the current production.

Kevin Depinet’s set design for the Owen Theatre’s spacious stage allows for scenes to be changed quickly to create diners (in Chicago and Denver), bars, offices, a hotel room, and Betty’s apartment. Keith Parham’s lighting and Mike Tutaj’s projection design help illustrate the passage of time, deliver news and show changes in websites. Alison Siple’s costumes, especially those for Steve and Lydia, are well suited to their characters.

This review was previously published on gapersblock.com/ac/.