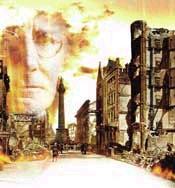 Dublin, 1926: the skeptical representation of the 1916 rebellion in The Plough and the Stars has provoked riots. The grieving widows of Republican martyrs are being hauled through the streets by Irish policemen and the public is outraged. Lady Gregory (Derbhle Crotty), co-founder of the Abbey theatre, is in conversation with W.B. Yeats (Se�n Campion). She wonders how they will be remembered. "We have created beauty in a broken place," says Yeats, "beautiful words when there were only slogans, images that pierce the soul in an age when the battling noise, the boast and the curse reigned in the streets. It was done for its own sake."

The solemn, heady world of novelist Colm T�ib�n’s first play is no place for those not versed in Irish art and political history. Following Heavenly Bodies in the Peacock program for the centenary of the National Theatre, Beauty in a Broken Place is another reflexive meditation on the role of theatre in defining social and personal identity. It does not so much tell the story of the 1926 riots as reflect upon its nuances. The play is elegant, erudite, and steeped in history, but offers rewards only to those prepared to engage with it as discourse rather than as drama. Its narrative energies dissipate quickly, leaving space for cerebral reflection buoyed by strong performances.

The work centers on the notion of intellectual freedom. On one hand are the merits of revolution: the freedom to rethink how we live and act upon our thoughts. Later there is the freedom to remember, one hand honoring those who have given their lives in the name of revolution, and yet, on the other, allowing space to reconsider the past and search for causes lost and people forgotten. Then there is the freedom of expression, a morass into which The Plough and the Stars rushed headlong, bringing with it the additional complication of the role the Abbey itself had played in the ferment of revolution in the first place.

The Plough and the Stars is now commonly accepted as a reflection of historical reality, which is ironic given the obviously constructed and polemical nature of the play. Yet in representing this story of its contentious first production, T�ib�n is at pains to make the point made by a protesting Mrs. Sheehy-Skeffington (also portrayed by Crotty): "How we remember defines more than anything else who we are and who we will be."

Memory is a treacherous space, and the debate around the play in 1926 ran to the heart of the new Ireland’s attempt to define its own identity through recourse to its past. Today, in the wake of a generation of revisionism, the memory of both 1916 and 1926 is itself now filtered through the process of representation, and as the personal dimension is eliminated with the passing of those who remember, history itself becomes as open a text as a work of theatre.

What does this mean for the new new Ireland, and for Irish drama in particular? It is has been a long time since we’ve had theatre riots in Dublin and there won’t be any over this play. Though thought-provoking, the play is not provocative. It asks its questions in a solemn, respectful way through beautifully written prose which tends towards philosophical discourse. There is certainly none of O’Casey’s fire and bluster here, not even in his character, who tends towards gentle irony rather than righteous indignation.

The production is handsome, with a set designed by Jamie Vartan which mimics the old Abbey, right down to the exit signs. Though period costume and authentic accents are employed, there is never any suggestion of naturalism. Moody lighting by Paul Keoghan enhances the sense of unreality and signification. Actors move about in pools of light against a plain black backdrop for the most part, drawing attention to the "theatricality" of this backstage drama.

Crotty is magnetic in the role of Lady Gregory. She portrays both the icy determination and raging self-doubt of the woman with an economy of movement, gesture, and facial expression. She is consistently spellbinding in her vocal delivery too, her precise tones drawing the audience.s attention to T�ib�n.s words. Campion represents both the swaggering hauteur and genuine idealism of Yeats, taking the audience beyond the basics of impersonation to the meaningful paradoxes at play in the character. O’Kelly relies upon a representation of O’Casey’s legendary proletarianism to engage the audience’s sympathies. The character frequently resorts to conspiratorial asides and physical clowning to signal his distance from those around him, and O’Kelly, a capable physical actor, handles this well. Karl Shiels is particularly good as censorious Abbey board member George O’Brien, whom he plays with a degree of appropriate exaggeration stopping just short of pantomime.