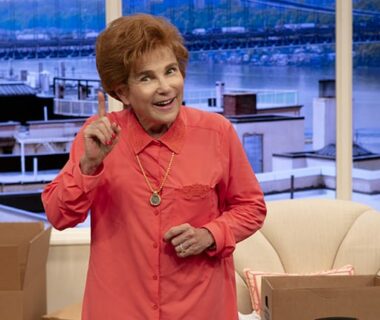 Among the hallmarks of 1980s culture were big hair, shoulder pads, yuppies, MTV and a middle-aged Jewish woman with a heavily accented raspy voice who achieved worldwide fame as a sex therapist.

In “Becoming Dr. Ruth” you learn that Ruth K. Westheimer, Ph.D., is a Holocaust survivor, was a skilled sniper in the Jewish underground in post-war Palestine, thrice married, authored 45 books and was the inspiration for a 1985 board game called Dr. Ruth’s Game of Good Sex, collectible copies of which currently command upward of $75 on eBay.

You will also be privileged to experience a remarkable performance by actress Tovah Feldshuh whose voice, accent, appearance, mannerisms and infectious giggle will have you utterly convinced you’re watching the real Dr. Ruth, in this impressive streaming production by North Coast Rep.

We meet Dr. Ruth in the middle of packing up the Manhattan apartment she shared for nearly four decades with late husband #3, Fred Westheimer. We gather from her side of a phone conversation that a family member is trying to talk her out of moving. Make no mistake: Dr. Ruth is determined not only with the issue currently at hand but in all matters throughout her remarkable life.

Handling the detritus of that life fuels 90 minutes of revealing and insightful narrative. Three large windows overlooking the Hudson River do double duty as projection screens for significant photos and minute treasures in Dr. Ruth’s hands. Set design by Marty Burnett, sound and projection by Aaron Rumley, a staggering assemblage of props by Phillip Korth (where on Earth does he find all this stuff?), costume design by Elisa Benzoni and the perfect wig by Peter Herman.