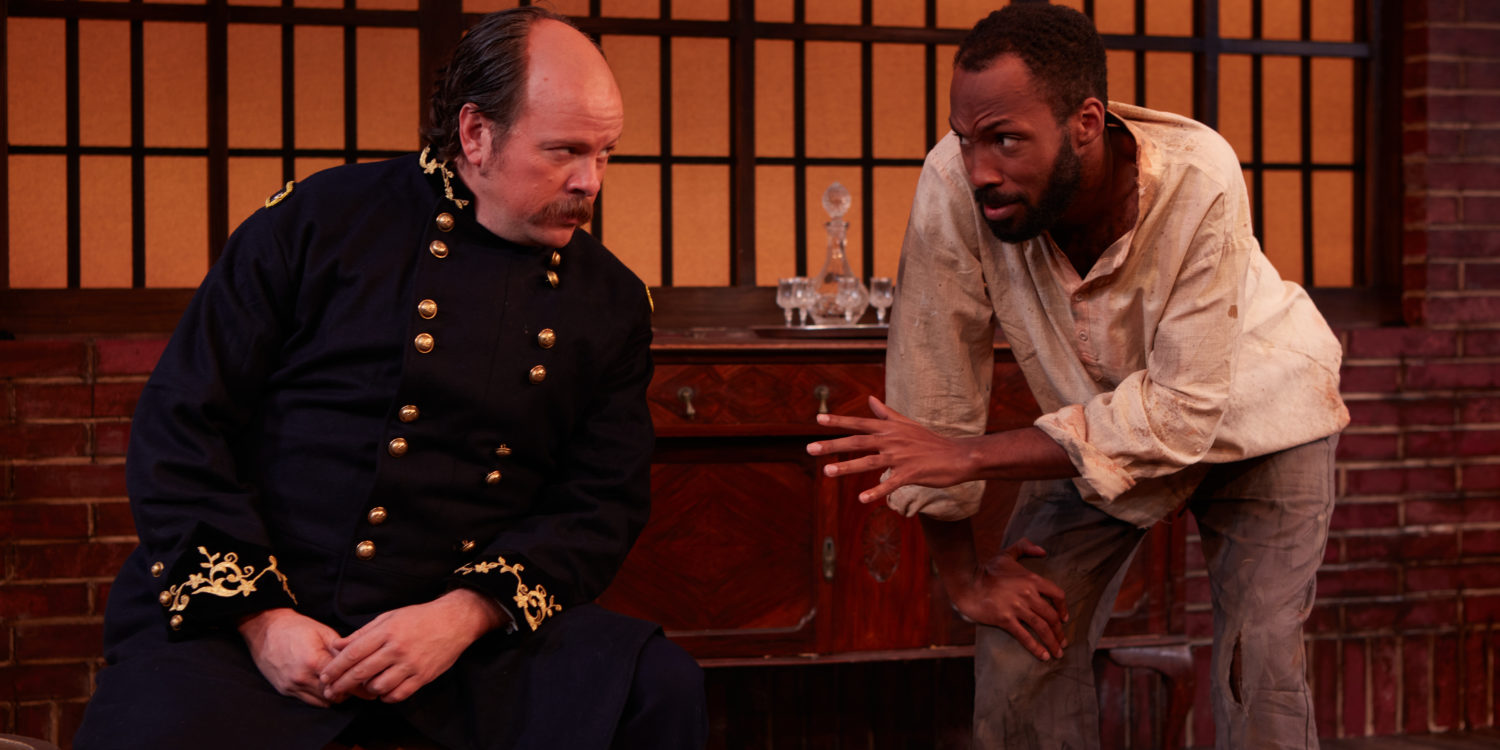 A play at the North Coast Rep

In the early days of the American Civil War, a political appointee with no military experience is placed in charge of a Union-held fortification in Virginia. Within days of the commanding officer’s arrival, three runaway slaves seek sanctuary at the fort, but federal law compels the return of the trio to their owners “within the territory of the United States.” Hold on. Virginia has just seceded from the Union effectively making Old Dominion a foreign nation in which U.S. law does not apply. Or does it?

This improbable set of circumstances, based on a real event, informs the comedy “Ben Butler” enjoying its Southern California Premiere at North Coast Rep. Even more improbable than the storyline is a comedy about the Civil War that delivers thanks to a whip-smart script, deft directing and a crackerjack cast.

The man on the hot seat is Major General Benjamin Butler (Richard Baird, in yet another of his masterful portrayals for North Coast Rep). A successful trial lawyer in civilian life, Butler is so new to his post that several of his campaign chests are still heavily padlocked awaiting unpacking. The only open chest reveals law books, blankets, and numerous bottles of spirits.

It falls upon Lieutenant Kelly (Brian Mackey), Butler’s adjutant who is nervously learning on the job, to bring the news to his superior that one of the slaves has demanded an audience. We learn in no uncertain terms that the general absolutely does not comply with demands. Unless, of course, they come from President Lincoln or Mrs. Butler.

Playwright Richard Strand decision to unspools the story by focusing on select words – demand, convoluted and contraband – allows for an exploration of Butler’s mind as he wrestles with his need to uphold the law but also his compassion for runaway Shepard Mallory (Brandon J. Pierce, in a compelling performance), whose life is in peril if returned to his owner.

When they finally meet, Butler finds an intellectual equal in Mallory who, courtesy of a white woman, was taught to read. Discussion is lively as Butler and Mallory trade barbs about the absurdity of the situation each face and possible resolutions. Several delicious scenes in this cerebral comedy are reminiscent of encounters between Captain Hawkeye Pierce and Colonial Potter in an episode of M.A.S.H.

Matters come to a head when Confederate Major Cary (Bruce Turk, resplendent as a haughty Southern gentleman) arrives to collect Mallory and the other slaves. There’s enormous fun at Cary’s expense as they blindfold the man, so he doesn’t use the opportunity to spy on the Union Army’s weaponry. Oops! Lieutenant Kelly repeatedly walks the hapless major into furniture and walls.

His blindfold removed Major Cary arrogantly says: “Allow me to state our demands.” Good luck with that.

A rapier-sharp toast by Butler gets the Confederate’s goat and resolves the matter. Moments, later, Butler is undone by a toast by Mallory. Both are touché moments in a satisfying evening of theater.

costume designer Renetta Lloyd shows us that the Civil War was also a fashion war in the resplendent uniforms worn by the officers.