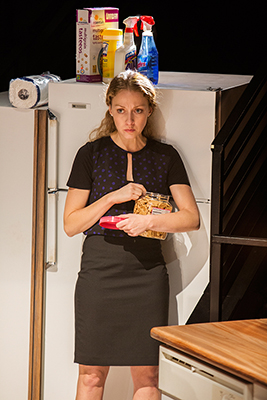 There is an emerging genre describing the economic downturn that began in late 2008 and continues today. Mass layoffs, foreclosures, the dystopian trajectory of the banking crisis — we are reliving these nightmares in fiction. Add “Bethany” to the list.

Set in a hopeless any-suburb in early 2009, “Bethany” follows Crystal (Jennifer Ferrin) as she struggles to get her life in order. For reasons that are at first obscure, Crystal has decided to squat in a recently foreclosed home. Quite literally, the lights are on but nobody’s home.

Her plans take a turn when she discovers noticeably unstable Gary (Carlo Albán) has already staked out her dream house. Gary is paranoid, suspicious, prone to violence — the perfect roommate. That Crystal is spending more than 30 seconds in the same room with Gary underscores her desperation.

And desperation is what this story is all about. Crystal works as a pure commission salesperson at a failing Saturn dealership. When skeezy motivational speaker Charlie (James Shanklin) expresses interest in a top-of-the-line vehicle, Crystal turns on all her sales charm to close the deal.

As the story unfolds and we learn the roots of Crystal’s desperation, it becomes an evolving test to see how far she will go to bring her plans to fruition. We want her to succeed; we just don’t want her to do so at any cost.

Ferrin does an admirable job as Crystal, ably making rapid transitions between despairing failure and perky salesbot. Albán seems less comfortable as the unsettling Gary. As for Shanklin, if his goal was to make us want to beat his character without mercy, he succeeds impressively.

The set evokes the cookie cutter suburbia we both dread and aspire to, middle class bordering on squalor. The direction is mostly on point, though the action scenes are less than credible.

In the end, the show gets about halfway to its destination. We empathize with Crystal, feel some anguish at her plight, but don’t quite find the emotional resonance. The play allows us to keep our distance, so we do.