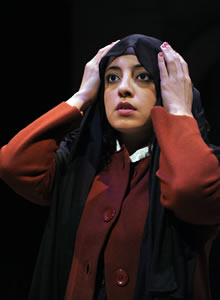 The story Palo Alto native Packer tells is important and well worth knowing. It derives directly from a piece he wrote for the “New Yorker” in 2007 that told of the trials and perils of non-military Iraqis working for the U.S. occupiers of their country as translators, drivers, clerks and support personnel. It paints a shocking, sometimes heartbreaking, picture of people who are shunned and reviled by their friends and neighbors, threatened by the numerous splinter groups who regard them as traitors and, in the end, after risking their lives day after day, abandoned by our government.

The problem lies first in the way the tale is told and second, in the way it is enacted on the Aurora stage. Packer is a fine journalist. His original essay was a page-turner and his 2005 book, “The Assassin’s Gate,” also about Iraq, was a finalist for the Pulitzer Prize. But this story of a pair of translators, one a Sunni and the other a Shiite, loses something (and please forgive me here) in translation from the page to the stage. The dialogue tends to be stilted (at least in English; I can’t vouch for the extensive passages in Arabic). The action is episodic. Packer is a fine writer but, in this, his first effort, has not yet mastered the dramatic form.

As for the acting, there is one excellent performance and another that is very good. Denmo Ibrahim is riveting as Intisar, one of the translators for the U.S., a bright, ambitious young woman in rebellion against the restrictions placed upon her sex by religion and the regime. James Wagner shows two faces of the American occupation, one as a happy-go-lucky soldier from the Midwest who is as bewildered by the Iraqis as they are by him, the other as a hard-nosed security officer, vengeful, sadistic and a stickler for the rules — except when they apply to him. Unfortunately, neither of these excellent actors has a leading role.

Adnan (Bobak Cyrus Bakhtiari) and Laith (Amir Sharafeh) are the leads, two translators who are close friends in spite of their sectarian differences. Their interaction with their boss, Bill Prescott (Alex Moggridge) is interesting in that it changes Prescott, the dangerously innocent embassy official more than it changes the Iraqis. Perhaps this is a deliberate metaphor: America may be changed by the experience in Iraq rather than the other way around. Moggridge is a decent actor but his “sea change” comes about too abruptly to be fully believed. Perhaps that’s the fault of the script. The two young men, the leads, simply are halting and inadequate in their roles. Keith Burkland plays the American ambassador, an ineffectual functionary whose “door is always open.” When called upon to get the young translators out of Iraq before they are assassinated, he notes: “How can we settle large numbers of Iraqis here when the President is determined to win there?” The open door is firmly shut when politics get in the way. The problems posed by “Betrayed” are pertinent, political and powerful. This is why, in spite of the technical problems, it is worth a look.