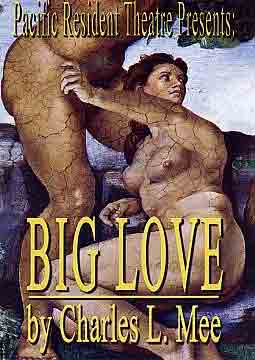 Comedy, entertainment, but a whole lot more is served up in Big Love at the Pacific Resident Theater. This modern update of Aeschylus’ The Suppliant Women shares little with the numerous other theater offerings this season which rewarm old material. Perhaps the fact that the parent play is not taught in every introduction to literature class helps make the material fresh, or, perhaps, this talented playwright simply has a fresher approach to life and writing. (For an able summary of the plot see Suzanne Weiss’ review of the Berkeley Rep production of Big Love)

Big Love references pop culture as comfortably as the classic. Actors burst into song such as "Bewitched Bothered and Bewildered," a Greek chorus of a different sort. Charles Mee easily fits commentary on gender issues, societal pressures, and commercialism into a humorous, athletic and never didactic frame.Each role is at once an archetype, be it feminist, valley girl or male chauvinist pig.Yet no archetype is totally good or bad. Each speaks the truth as well as the extreme. Perhaps this is best expressed by an older woman, pressed into service as a judge.

Fifty young Greek women who are being forced against their will to marry their cousins agree to slay their husbands on their wedding night. All but one carries out her promise. The fiftieth finds she loves him after all and does not kill her groom. The others accuse her of betrayal and a trial is hastily assembled. The old woman’s verdict takes note of the betrayal, the brutality of the crimes and the appalling circumstance that motivated the women and says she will render "no justice for the sake of peace." Think about it. It is a profound statement that rings true in light of current world tensions. More bloodletting would not solve anything.

Polio shaped Charles Mee’s view of the world. To people under 50 polio may be an historic artifact. To those who can recall the 1940’s and 50’s, the word strikes even more fear than the current talk of small pox. Parents gave their children dire warnings: avoid public swimming pools, don’t share eating utensils, stay away from public places, etc. and it was the rare family who did not know someone who was severely crippled by the disease or perhaps had died. Images of people on iron lungs for the rest of their lives were everywhere in the press.

One night in 1953, Mee was a football loving, dinner jacket clad, 15 year old living an idyllic middle class life in Barrington Illinois, outside of Chicago, on his first date, hoping for his first kiss, when his legs began to give way. "This night was the beginning, and the end, of my adolescent entry into the world of sex ," he wrote in A Nearly Normal Life. The intensity of the adolescent and the perspective of an extraordinary man who has viewed life on crutches for the next 46 years inform his writing with energy, enthusiasm and wisdom.

The dialogue of Big Love is so brisk and clever, the athleticism of the cast as they literally throw themselves at the padded floor to express rage is so entertaining, that the hard political commentaries can almost slide by. But they are there and worth reflecting upon.One senses that this is how Mee handled the challenge that polio dealt him: with humor, wit, a keen eye, incredible energy and distrust of platitudes.