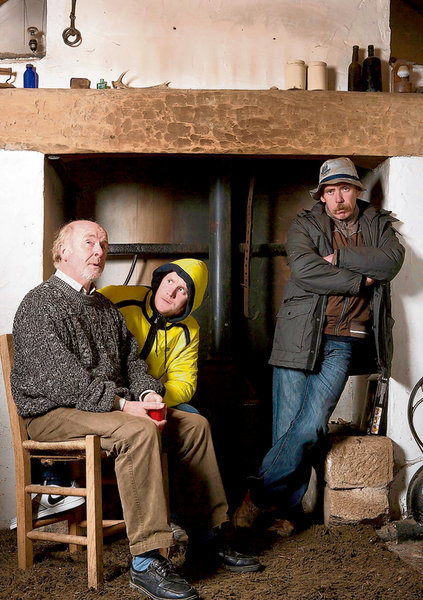 Clarence (Mark Lambert) is an elderly man living alone in a country cottage. He has taken a ride home from Ray (Joe Hanley) and his brother Colin (Ian-Lloyd Anderson), and invites them in for some hospitality: a few drinks, a bit of food, some friendly conversation. Colin is jazzed by the quaint homeliness of the old man’s place, and excitedly accepts some whiskey to go with the cider he has brought. Clarence finds his energy entertaining, and seems happy with the company as he loads up his own mug with a generous measure.

When Ray enters, there’s something more than sharp about his eyes. He’s not just looking around. He’s casing the joint. When Clarence goes off to the kitchen, our worst fears are confirmed. Ray tells Colin there’s a trailer around the back, and that they should take it when they go, along with the antique clock his eyes constantly flit back to. The set-up isn’t massively promising, suggesting an all too obvious clash of values and a fairly predictable plot trajectory. But playwright Sean McLoughlin’s sophomore effort maintains a strong and steady hold from its opening scenes with the aid of a focused trio of performances that enable the subtle humanity at the core of the characterizations to override the forays into the obvious on the level of story.

Hanley is particularly pivotal. His eyes are tremendous, glaring out from under his hat to silence Colin’s indiscreet remarks, switching from a predator’s gaze to the wide-eyed wonder of an avid learner as Clarence (a former teacher) discusses topics of interest, then to the nervous shooting glances of a caged animal looking for an exit when the conversation becomes more personal than he can handle. The actor is also superb at occupying physical space with what seems a casual gait, sprawled in a chair in the middle of the stage, yet always creating the impression of layers of energy. This is all reinforced by superb timing in his delivery of dialogue, which does the same thing— there are many agendas unfolding as the characters talk, and sometimes more than one thread of communication.

Lambert is also terrific, registering a lack of condescension drawn from McLoughlin’s script that expresses the essential humanism of the play. Lambert embodies this in an engaging performance that speaks clearly of a lonely old man with education enough to know there may be more going on that meets the eye, but with desperation (and demons) enough both to accept and ignore what he chooses. Anderson has the more straightforward bit— the edgy young man full of smiles and japes who you know is going to blow before the end. When he does, it is the script’s most contrived and undeserved moment— an acceleration of plot to drive the play to a climax. The actor manages it well, though, and is given a good, long aftermath to restore some dimension to the role, which he does in believable and poignant scenes of remorse.