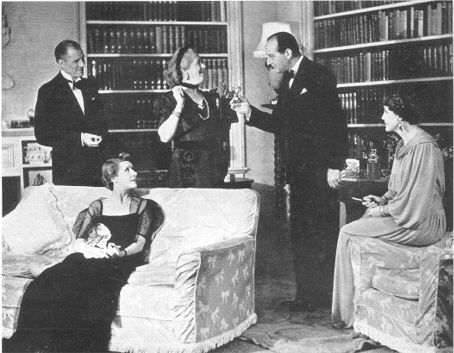 Thirty years after his death, the plays of No�l Coward continue to be performed with great frequency, an indication both of public popularity and of roles that make desirable vehicles for actors to do star turns. Broadway will see yet another revival of Private Lives this season. (culturevulture.net reviews of London productions of Private Lives and Hay Fever, a Dublin production of Blithe Spirit, and a television biography of Coward all attract substantial attention, despite being buried in the archives for some time now.)

Though Coward wrote some serious plays it is the comedies that remain of interest. Generally light on character development and long on wit and acute and bitchy observation of the manners of the day, the success of these plays in performance requires lightness, high style, and the capture of a somewhat arch, not a little campy attitude that is unique to Coward.

Blithe Spirit (1941), a second tier comedy several steps down from Private Lives and Hay Fever, is nonetheless of sufficient quality to merit revival. It’s uncomplicated plot has the ghost of a deceased wife, Elvira, return to haunt (and harass) her surviving husband, Charles Condomine, a writer who has remarried. Wife number two, Ruth, finds herself in competition with a ghost (whom she cannot see) and Charles’ status quo is so upended that he is forced to reassess his relationships.

Unfortunately, American Conservatory Theater’s new production is utterly lacking in Coward-ly style. What should be light is leaden. Director Charles Randolph-Wright chose to do this play as a vehicle for A.C.T. regular Gregory Wallace who speaks here in an indeterminate accent (accents are all over the map in this production) that runs from "hidjous" as an attempt at a British "hideous" to a repeated "tomorrah" for "tomorrow," whose origins remain a mystery. Most of the time the accent and the posturing seem a poor and awkward take on Cary Grant.

A line like "It’s amazing how many people are shocked by honesty and how few by deceit." should be riffed off with casual ease, letting the audience find its irony and truth and humor, but not lingering beyond its weight. Randolph-Wright doesn’t seem to trust his audience and signals these mots with such a heavy hand that they might as well have put cue cards facing the audience instructing it when to laugh. In other instances the timing of the dialogue and pauses is so poor that the audience is given no chance to pick up on a funny bit such as "Anything interesting in the Times?" "Don’t be silly, Charles!"

Not only does he not trust his audience, but Randolph-Wright seriously seems not to trust the play itself. The necessary high style of the drawing room gives way to low style situation comedy, with banal physical humor injected as if the script itself did not provide sufficient amusement. The greatest victim of this approach is Lori Larsen as Madame Arcati, the medium who succeeds in bringing back the ghost of Elvira. Instead of the genuinely amusing batty eccentricity of a Margaret Rutherford (who was in the original London cast in 1941 and in the1945 film) Randolph-Wright has Larsen indulge in the most cornball of physical comedy. Even before she sheds her turban to display her frazzled red hair, it’s Lucille Ball hijinks, not Noel Coward comedy. And Randolph-Wright errs, too, with the maid, Edith (Jessica Turner), for whom funny physical comedy is built into the script–her tendency to run, her efforts to walk slowly. This is also exaggerated beyond the subtle humor it might have contained into a music hall commonness out of keeping with the play.

ReneAugesen is an attractive and sexy Elvira, with a throaty, buttery speaking voice, blessed with the only attractive costume on stage. Madame Arcati and Ruth (Shona Tucker) are not so lucky. Arcati is stuck in clown’s outfits (clashing plaids, Robin Hood hats) and Ruth in the ugliest, most unbecoming dresses since Mr. Blackwell started compiling his lists. Tucker, an experienced actor, makes a valiant try here, but never seems to inhabit her role; she also has a thin, reedy speaking voice that seems to have little range.