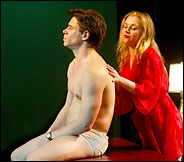 Of the new young playwrights who have emerged in the past decade, Rebecca Gilman is unique in that she has embraced a kind of drama that most of her contemporaries have rejected: the social problem play. Her plays are not linguistically inventive, nor do they consciously violate traditional chronology, nor employ other experimental techniques. No, their social milieus are precisely set, often in the lowest social stratum, and realistically presented. Harking back to the more than a century old tradition of the thesis drama (such as Eugene Brieux’s 1902 play about syphilis, Damaged Goods), Gilman focuses upon pressing social problems which she aims to elucidate by good reporting and engaging dramaturgy.

Gilman first created interest and controversy with her 1999 play Spinning into Butter which probed the nature of racism by charting how pervasive it is even beneath a liberal facade. The following year she offered Boy Gets Girl, a harrowing case study of stalking in which the female protagonist struggles to preserve her identity and ultimately her life against an increasingly pathological admirer. Earlier this year Gilman presented The Glory of Living, another harrowing lower depths journey down the pathological roads of pedophilia and serial murder.

Since this technique of creating realistic drama around specific social problems has been appropriated by high-end television series such as NYPD Blue and Law and Order, it can be seen why many critics, even as they admire the craft involved, have been dismissive of Gilman’s work. But as her canon continues to grow it becomes increasingly obvious that her goal is much more than creating TV drama for the stage.

Even high-end television has to cop out to satisfy its mass audience: lost children can’t remain lost, murders must be solved, motives must be clarified. These things Gilman refuses to do. Having chosen her central issue, she does her homework and notes how seldom the bromidic resolutions of popular art occur in the real world. She does not deny the possibility of solution; she notes its infrequency. In this respect she reveals herself as a classic Naturalist in the late 19th-century sense: The human condition is dark and implacable; it can best be observed by focusing on the lower classes or on the hidden underside of the middle class. This revealed world of impulse and determinacy should be recorded objectively and scientifically. Cumulatively, Gilman’s work increasingly represents a coherent artistic vision.

In her latest play to reach New York (like its predecessors after its debut at Chicago’s Goodman Theatre), Blue Surge, displays these qualities admirably. Although it does not focus on one central problem, it does address an essential larger social question: What control do we really have over our social fates?

Set in a mid-sized Midwestern city, it traces the relationships between two policemen and the women they meet while attempting to set up a sting to close the massage parlor in which the women work. One couple, Curt and Sandy, receive primary attention. Curt is essentially decent, desperately striving to make something of a life which started in the hopelessness of having a father who was a grave robber. Painfully aware of his inadequacies (the sting failed because he didn’t remove his underwear), he knows he won’t be promoted to lieutenant. Ultimately his decency is his undoing because, hearing of the imminent bust of the parlor where Sandy, whom he started seeing, continues to work, he appropriates police department money to give her an opportunity to flee. One of life’s losers who always finds the "surge of blueness. . . like a sadness" that he hears in Duke Ellington’s misinterpreted song "Blue Serge," he finds himself painfully aware at play’s end that he is downwardly mobile.

The other couple, Doug and Beth, and Sandy herself are less destructively introspective and hence more apt to survive. Sandy, in particular, at play’s end, rises as Curt falls. But she does so by accepting the life of a prostitute as the only antidote to the dead-end drudgery that society would offer as an alternative to one of her class. She’s going into business for herself.

Gilman notes that the American Dream comes in all sizes, and that, despite our insistent ideology of self-made success, for the most part our choices and chances in life continue to be defined by where we come from. Gilman is not sanguine about contemporary social ascendancy. Ever the clear-eyed reporter, she reveals in her plays a more socially intractable culture than we generally care to acknowledge.

Gilman’s dramatic style plays to the dominant strength of American actors: visceral realism. All the actors here give excellent accounts of themselves. Joe Murphy as Curt has the most complex task in having to offer us a character who is not too smart but nonetheless inquisitive, not too good but essentially decent. He avoids striking false notes and ultimately convinces. Rachel Miner as Sandy must fight the many stereotypes of women of easy virtue that proliferate in drama. With the help of Gilman’s natural dialogue she does very well, and adds another incisive portrait to Gilman’s gallery of memorable troubled heroines that includes Mary Beth Fisher’s Theresa in Boy Gets Girl and Anna Paquin’s Lisa in The Glory of Living.

Robert Falls, the artistic director of the Goodman Theatre, who brought his acclaimed production of Death of a Salesman to Broadway two years ago, has also created a productional fluidity for a play which is not naturalistic in its preservation of the unities. Gilman’s realism is structurally cinematic in its alternation of short scenes set in various locales: massage parlor, bar, Curt’s place, police station. Set designer Walt Spangler’s efficient carts add another layer of excellence to an attention-sustaining production.