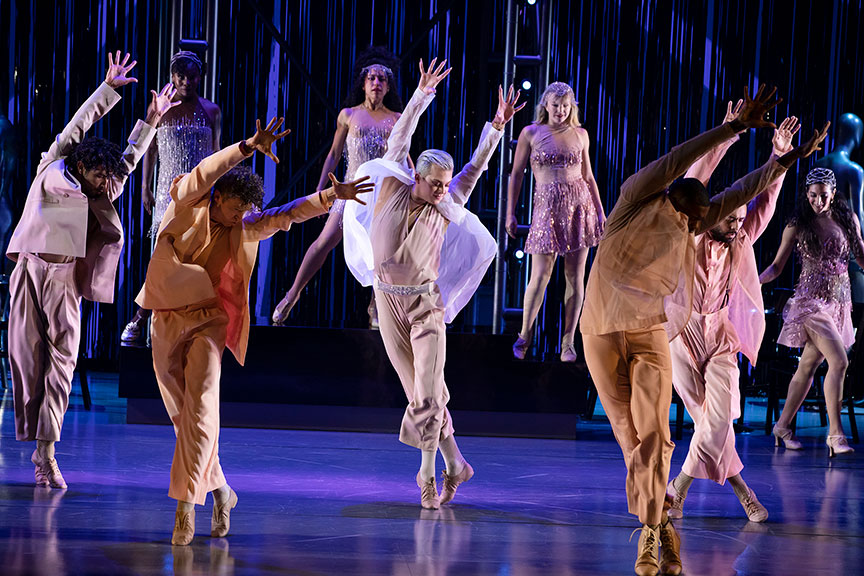 Bob Fosse’s Dancin’ is not a play or even a musical – it’s a show. There’s no plot or story and only occasional talking or even singing. The title is the synopsis; it’s just dancing.

And that is a pretty amazing thing. The show streams through several sometimes-related vignettes, which are simply excuses to dance. The music is often interesting and occasionally iconic – Mr. Bojangles, Big Spender, When Johnny Comes Marching Home, Sing, Sing, Sing. But the dancing is just amazing, and I marveled at the company’s combination of technical mastery and sheer endurance.

Dancin’ is a revival of Bob Fosse’s 1978 production and carries both the weight and buoyancy of that era. New York was a grittier place then (It’s wondrous, with treasures to satiate desires both subtle and gross, but it’s not for the timid), and Dancin’ clearly evokes that atmosphere. The show is populated with pimps, whores, hoodlums, fish-outta-water and lots and lots of vamps.

The production has several updates from the original. Dancin’ is filled with anachronistic portrayals of women, leading to a brief lesson on the Bechdel test, which examines how women are portrayed in fiction. The segment is cute, one of the few examples of actual dialogue, and acts as a (sort of) apologia for the blatant late-70s misogyny.

In keeping with the backdrop of big city disarray, the set evokes scaffolding and fire escapes, with the cast dancing, on, under, inside and between. One of the highlights was Sing, Sing, Sing, an extended vignette, during which drummer Gary Seligson moves from the orchestra to the top scaffold and wails away for 20 minutes while the dancers move through different styles.

But again, it’s all about the dancing, and the dancing is incredible: jazz (duh), ballet, soft shoe, a little tap. It’s an ensemble production, but cast members bring their own personalities to the stage. While they often perform the same moves in unison, each dancer infuses an element of their own style. After a bit, you get to know them as individuals – Jōvan Dansberry, Karli Dinardo, Kolton Krouse – as they rotate on and off stage.

And that’s cool on an even deeper level. There’s an element of wonder at the sheer magnitude of the performances, and I couldn’t help but envision the work that got them here – the childhood classes, endless auditions, road shows. They seem so happy to be here. Even with some of the darker themes, the entire production is infused with joy, and who couldn’t use a little more of that?