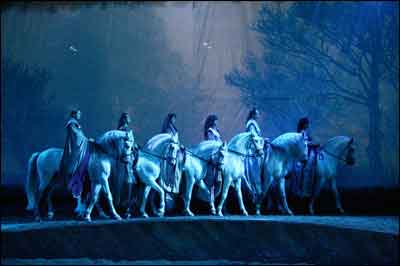 Cavalia, directed by Normand Latourelle, formerly of Cirque de Soleil, is like a dream: beautiful white horses, music, Lord of the Rings-style costumes, and people flying all over the place. A hybrid circus that travels around in its own multi-peaked tent, Cavalia is more about images than animal tricks and acrobatics. It&#146;s even further away than the hugely popular Cirque de Soleil from the traditional circus medium, a leap into entertainment that embodies a deeply satisfying instinct, the love of man for horse. Here, the horses run free, they play and perform, they have an eye-to-eye relationship with their trainers. And if the show is magical, it is also deeply moving.

Spending two hours in the presence of these magnificent creatures (32 of them), watching them running at full gallop, chasing each other, nuzzling a human or lying on their backs, wriggling–all in a theatrical environment, a huge, sand-filled expanse lit and designed like an opera set– feels profoundly satisfying. If only all dreams could be this wonderful.

Linked by songs and a filmscore-style soundtrack by Michael Cusson, the different scenes in Cavalia also include bareback riding, saddle tricks, dressage (one section is like a horse ballet, with the horses moving in slow side-stepping lines and circles), and plenty of turns for the acrobats to jump in. Compared to these long-maned white horses, mostly Lusitanian stallions, the human performers seem a little insignificant, even as they fly valiantly through the air and tumble in the sand, ride upside down and play catch on galloping horseback. If the circus traditionally is a ringmaster&#146;s battery of acts, Cavalia belongs to the horses, just as intended. The human performers add context, not magic.

French husband and wife team Frederic Pignon and Magali Delgado form the nucleus around which all this is possible. Cavalia is clearly built around their skills and their horses, all of the Lusitanian Stallions and many of the others were raised on their breeding farm in the South of France. The love, mutual respect and deep communication between trainer and horse is at the heart of this show. Magali, a competitive dressage rider, specializes in this form, where the fancy footwork and walking patterns demonstrate a high level of technique.

Pignon, on the other hand, rarely rides, his contribution is on the ground, where he looks into the eyes of each of his towering stallions, and using simple hand gestures, taps, verbal cues and loving encouragement, gives them a chance to make horse dances with him, stand-up on two legs and balance, or kneel, one by one, on the ground. Happily, instead of food rewards, he is just as likely to end a session with play, and the times when Pignon is dashing around, playing tag with his own horses, laughing, are unique in their literally unbridled theatrical beauty and joy.