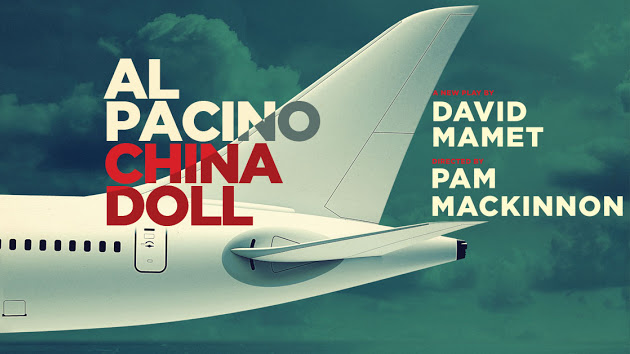 Some think that it is not kosher to review a play while it is still in previews, but, I don’t live in New York any longer and my recent visit there was timed to coincide with other events. But how could I miss seeing and reporting on Al Pacino in a brand new play by the renowned David Mamet, even if a very early preview? So after a discussion with my publisher, we decided that disclosure would be sufficient.

First of all, it was an absolute pleasure to see Oscar and Tony Award winner Al Pacino on stage, tackling and largely succeeding in an extremely difficult role. And he’s on the stage for the entire length of the two-act drama. In a play David Mamet wrote specifically for the star, Pacino plays Mickey Ross, an aging billionaire, who has just bought a new plane for his treasured young (unseen) fiancée.

He intends to retire and live with her, and he’s just about out the door to start his new life when he receives a phone call that turns his plans into chaos. His young, seemingly bland but astute assistant, Carson (Christopher Denham), tries to be helpful, but Mickey, who has seen and done it all, is not one to take advice from anyone.

Through most of the production, Pacino has a Bluetooth phone device attached to his ear, receiving a recycling basket full of bad news. He tries variously to intimidate, manipulate, anger, assuage and apologize to the various unseen and unheard callers — whatever he thinks may succeed in getting his plans back on course.

Although the audience only has Pacino’s physical and verbal reactions by which to interpret the import of the other side of the conversation, most of the time the writing enables the audience to understand the call. Pacino makes these one-sided conversations seem real, multi-dimensional and totally engrossing. However, we’re missing the author’s famous “Mamet speak,” his interrupt-driven natural-sounding two-way conversations. Here, Mamet makes Pacino do all the work himself. It’s almost as though Mamet had conducted a writing exercise, expecting his star to surmount the very difficult task the author had set for him.

Perhaps that is one reason that the plot of “China Doll” is uneven in parts and the ending comes all too suddenly. Rather than gradually building tension to a crescendo, the drama moves in fits and starts while the audience wonders where it is heading. Then the unexpected happens, the curtain plops down, and the audience is left playing catch-up. If there was foreshadowing of the climax, I confess that I missed it.

Remember, that I’m writing about an early preview, and some of the jerkiness of the plot could be smoothed out by a bit of rewriting and by tightening up the pacing of the play. Talented director Pam McKinnon (“Who’s Afraid of Virginia Woolf,” 2013, the musical “Amelie,” 2015) should be able to massage some of the kinks out of “China Doll.”

One of the most interesting aspects of the drama is the way in which the audience learns about Mickey Ross. Mamet weaves various parts of his history and psychological makeup throughout the phone calls until the audience gradually understands a bit of his psyche. I wish more of Mickey’s inner life had been revealed. Is he a sympathetic character whose life has gone astray? Is he a tough, mean bastard who deserves whatever befalls him? Or a man whom love has transformed too late in his life? Ultimately, he’s a complex combination of all of the above.

Mamet said about “China Doll,” “…It is better than oral sex.” Sorry, I don’t buy the comparison, but it certainly reveals a lot about Mamet. He’s a fascinating writer who has created unforgettable characters in his marvelous plays and films. Not completely sure that Mickey Ross will join that illustrious group of characters, but Pacino’s bravura performance in “China Doll” is an exceptional theatrical experience.