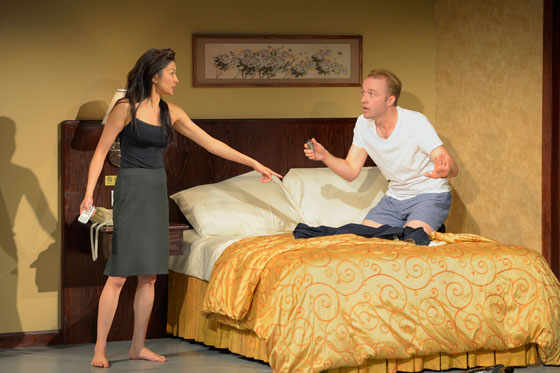 Ka-ching! David Henry Hwang’s “Chinglish” is right on the money. The laugh-filled Broadway hit by the Pulitzer Prize finalist and Tony Award-winning author of “M. Butterfly,” “Yellow Face” and “Golden Child” follows an American businessman to China as he learns about what is lost in translation and what can be gained by misunderstanding. It’s about loose connections; double-dealing in both politics and business and friendship; and loyalty, with a little romance thrown in for spice. It is both bilingual and hilarious.

Leigh Silverman, who directed this show in its Chicago debut and then on Broadway, has assembled an ensemble cast that doesn’t miss a beat, headed by local actor Alex Moggridge as Daniel Cavanaugh, something of an innocent abroad who has come to China to bolster his family’s sagging fortunes by providing accurate English translation signage to a new provincial cultural center. After all, this is a country that has been known to designate the handicapped restroom as “deformed men’s toilet” and warns you to “slip carefully” when you are being instructed not to fall down. Should be a piece of cake, right? Wrong! Daniel quickly learns that his ignorance of Chinese language and customs far outstrips Chinese ignorance of ours and the results can be as disastrous as they are amusing. (Clever mistranslations for trash disposal and other theatrical miscellany dot the Berkeley Rep lobby in an echo of Daniel’s dilemma).

Enter “Teacher Peter” (Brian Nishii), a bilingual Brit who has been living and working in China for years. As a consultant, he will — for a large fee — help Daniel navigate the choppy waters of Chinese diplomacy as he translates. Even better, the minister in charge (a particularly engaging Larry Lei Zhang) owes Peter one. But the seemingly jovial minister is counterbalanced by the enigmatic and elegant Madame Xi, his second-in-command who seems hostile to the business arrangement. Played by veteran film and television actress Michelle Krusiec with icy élan, Mme. Xi will end up in Daniel’s bed and heart before the first act curtain comes down.

And this is only the beginning. The scenery and situations change rapidly (David Korins’ set design is a marvel of rotating efficiency) and nothing is quite what it seems. It’s not all fun and games, either. You may find yourself pondering the vagaries of misunderstanding and lack of communication and the effect on your own life on the way home. There is a subtle subtext here and a couple of poignant moments at the end.

The cast is rounded out by Vivian Chiu, Celeste Den and Austin Ku as a series of bumbling translators and scheming government functionaries and everybody is terrific. Anita Yavich did the costumes here as on Broadway and the Mandarin Chinese translations, hilariously and essentially projected on the wall are by Candace Chong.

As the late Ed Sullivan used to say, “It’s a really good shew.” Or did he mean show?