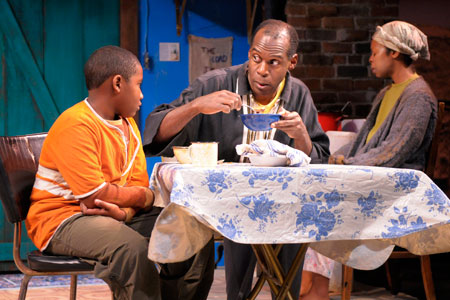 The more things change, etc. etc. For decades the voice of South African playwright Athol Fugard rang out against the injustices of apartheid in plays like “Blood Knot,” “Boesman and Lena,” “Sizwe Bansi is Dead” and “Master Harold…and the Boys.” Now, at the age of 77, he is taking on the disappointments of the post-apartheid era – continuing poverty among the native population, government corruption and neglect and – worst of all – the AIDS epidemic. Apartheid may have been ugly but the aftermath is far from a pretty scene.

While it does not have the power or beauty of the earlier plays, “Coming Home” is a worthy entry in the Fugard canon and can be considered as a sequel to the 1995 “Valley Song,” also performed at Berkeley Rep. The young girl Veronica, who aspired to become a singer in the big city in “Valley Song,” has come back to her dusty village. She is older, defeated, disillusioned and sick. Beautifully played by award-winning New York actress, Roslyn Ruff, Veronica is something of a metaphor for post-apartheid South Africa itself, happy and hopeful at the outset, then angry and conflicted and finally resigned. Her beloved grandfather, her “Oupa,” is dead. He visits her only in ghostly dreams. Her only lifeline is her small son, Mannetjie (Rashad Ali Johnson), to whom she tells tales of simpler and, at least in recollection, happier days.

Enter Alfred: childhood friend, longtime admirer; a little simple but good at heart. He has never forgotten the young girl who helped him cheat at school (until they got caught) and has taken over the tending of Oupa’s plot of land as well as safeguarding his meager possessions – mostly pots and pans – against her return. Their reunion is so rambunctious, so loud and full of life, that, on the night I saw it, a helper dog in the front row began to bark and subsequently became growlingly restless every time actor Thomas Silcott came onstage. But the dog was the only one who could dislike Alfred, so open, ebullient and kind in Silcott’s fine characterization that you wished you had somebody like him in your own life. Nobody, that is, except the child, grown older in Act Two and now played by Jaden Malik Wiggins.

Four years after arriving at the hovel his mother calls home (set by Eugene Lee) Mannetjie has grown into an honor student who aspires to a higher education. He may hate Alfred but he loves books and keeps difficult and favorite words in a special tin where Oupa used to store his pumpkin seeds. This will become another metaphor, along with the one about the late frost that killed all the young shoots except one. Where the grandfather treasured the seeds he put into the ground, the child will nurture the seeds of knowledge. Where the mother and grandfather fail, Mannetjie himself may become South Africa’s hope. (The metaphors are a little heavy-handed and the ghost sequences, one in each act, with Lou Ferguson as the wise old grandfather, really do not work. They are simplistic and slow down the action of what is otherwise an absorbing play).

In the second act, Veronica, sick with AIDS and too poor for the medication that might help her, convinces Alfred to marry her so that, when she dies, Mannetjie will not be turned over to the Child Welfare Service. But Alfred will do more, finally winning over the hostile pre-teen. Before that happens, however, their verbal sparring will provide some sparks of laughter in what otherwise is a dark and serious story. Anchored by two remarkable performances, those of Ruff and Silcott, it is not, however, hard to take.