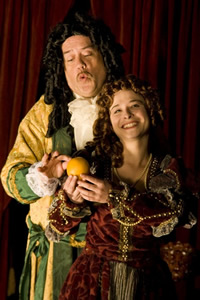 Mildred’s Umbrella, the little theater company with a penchant for thinking big, takes a trip down restoration England lane with Jeffery Hatcher’s delightful comedy Compleat Female Stage Beauty. Hatcher chronicles the bumpy road for male actors when women were allowed back on stage, to play, what else, women. It doesn’t come as good news for one male actor, Edward Kynaston, who regularly brings the house down with his histrionic portrayal of Desdemona. When the dames enter the scene, with no shortage of assorted mischief, the renown actor is reduced to a shadow of his former self, busing the coffee cups of the local forever-scribbling critic at a seedy tavern.

But it’s Sara Jo Dunstan as Nell Gwynn, King Charles’ resident prostitute, who steals our hearts and just about every scene she is in. Dunstan radiates punch, charisma and delicious exuberance; she’s an attention magnet at every turn.

It’s a big show for Mildred, and the production looks a bit stretched and stuffed into their tiny home at Midtown Arts Center. But what the play lacks in extravagance it makes up in sheer feisty energy, and some of that tightness actually works for the play. The voluptuousness of Hatcher’s play remains nicely intact despite budget constrains. Veteran Houston director Ron Jones directs with a keen eye for period mannerisms and a spunky, farcical pace. Imagine Masterpiece Theater but with way more sass. Jodi Bobrovski’s set does a lot with very little—a row of elevated chairs as the interior of a theater, a dressing room table, and of course, a pillow filled bed, where much of the action takes place. Kelly Robertson’s fanciful costumes sparkle in the intimate setting.

In the end, Kynaston realizes he’s not such a shabby Othello after all, something he figured out after deciding not to off Desdemona with his velvet pearl-encrusted pillow. The plays pulls you in and leaves you wondering what Kynaston finally did with his Hamlet. All in all, an entertaining few hours, guaranteed to quell your econ-woes for at least the duration of this zesty play.