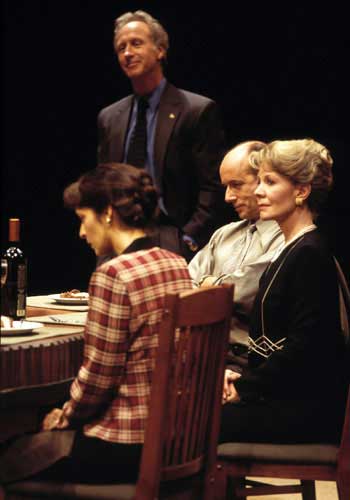 Many moons before Governor Schwarzenegger there was Continental Divide. David Edgar began his two-play cycle on the American political process in 2000 and it bowed in Ashland, Oregon, earlier this year. A co-production with Berkeley Repertory Theatre, it was deftly directed by the latter&#146;s artistic head, Tony Taccone, who finally has brought it home. Next stop, London. So, if this sprawling tale of a heated gubernatorial race in a nameless Western state possessed of glorious views, ancient trees and dwindling resources calls up a bit of dej� vu, it is purely coincidental.

Or is it? The cast of characters certainly is different &#150; the affable Sheldon Vine (Bill Geissinger) on the Republican side and a rather chilly Rebecca McKeene (Melissa Smith) as the Democrat &#150; but the mechanics are all too familiar. Fundraising is the key and television advertising the lock that it opens. The debate, which is the climax of both plays, is more rehearsal than conviction and political strategists are running the show. Winning is everything because what can you do for anybody if you lose? And the issues are inextricably tied to that win/lose scenario.

Of course, both candidates have a skeleton or two in their respective closets. The rattling of old bones provides much of the plot, especially in the second play, aptly titled Daughters of the Revolution. If Briton Edgar has a fascination with our country&#146;s politics, he is no less taken with the legacy of the &#145;60s. In the new millennium, the chickens hatched back then have come home to roost, quite specifically in the ancient forests that form a striking backdrop for scenes in both plays. Vine&#146;s daughter (Christine Williams) is a "tree-hugger," an eco-terrorist pledged to stop the logging industry in its nefarious tracks. Trouble is, the Vines made their money &#150; the money that is financing Sheldon&#146;s campaign &#150; from the logging of those very trees, albeit responsibly, before selling out to a more ruthless concern that seems to be bent on logging them to extinction.

More trouble lies in a controversial proposition on the ballot that would require a loyalty oath from all those applying for public housing or employment, standing for election, or registering to vote. Vine won&#146;t support Prop. 92, in spite of his conservative position, because he loves his kid, even though she lives literally out on a limb, decked out in dreadlocks and a scruffy T-shirt that reads "Trees are people too." Emotional fuel has been thrown on the fiery proposition when a young woman is shot &#150; perhaps gratuitously &#150; by a security guard, while attempting to cut down a genetically altered tree. She could have been Sheldon Vine&#146;s daughter and he knows it.

Democrat McKeene is similarly slow to step up to the plate. Her hand is forced when some damning evidence from her youthful activist days is dug up to haunt her. The difference between the candidates is the difference between a man who refuses to betray someone he loves, even when it may cost him the prize, and a woman who has learned to bend with the prevailing winds. Each playgoer gets to choose on their own, courtesy of a paper ballot, thoughtfully provided by Berkeley Rep.The results will be tallied at the end of the run.

If the candidates are different, so are the two plays, both in structure and feel. They each stand alone but it is far more interesting to see them as a pair. Mothers Against is essentially a family drama and an ensemble piece. Set in the ancestral Vine home, in the midst of those hotly contested redwoods, it brings us into the "prep," a detailed rehearsal for the upcoming debate, replete with a "stand-in" for the opponent (Susannah Schulman in an arresting performance). The cast is small, the candidate, his wife, (the cool aristocratic Robynn Rodriguez), and their daughter, plus Mitch Vine (Tony DeBruno), Sheldon&#146;s older brother and campaign chair, a man with a few skeletons of his own, as well as an ax to grind. Attendant politicos include the campaign manager (a fast talking Michael Elich), a foot-in-the-mouth pollster (Vilma Silva), Derrick Lee Weeden as a political analyst and Schulman&#146;s charismatic stand-in.

The mood is intimate, the dialogue clever and often quite funny, and the focus tight.Daughters, on the other hand, is big, sprawling and in your face, with 15 actors playing some 40 roles. Edgar uses the large canvas of the revolutionary &#145;60s to paint the Democrat side of the picture. University dean Michael Bern (an increasingly distraught Terry Layman) is presented with his old FBI file as a 55th birthday gift. It was done as a joke but he finds things in it that could imperil his career. Michaels&#146;s quest to uncover the identity of the "snitch" that exposed him has far-reaching consequences, not only for him but also for Democratic-hopeful Rebecca McKeene. Ensuing developments are an illustration of Mitch&#146;s line in Mothers: "Our present and our future acts are rooted in the past."

While the entire cast is excellent, outstanding work is done here, not just by Layman, who is the center of almost every scene, but by Lorri Holt as Blair Lowe, former comrade-in-arms, now campaign manager for McKeene. Weeden shows up again as a sympathetic grass-roots organizer and Rodriguez does an amazing about-face in the role of an agitator, gone underground. Designer William Bloodgood&#146;s rear-screen projections, ranging from different treatments of the flag to mug shots, posters, slogans from the 60s and vistas worthy of Marin, are marvelous.

Nevertheless, Mothers Against is the better, tighter play. Daughters is a tad confusing, with too many forced connections between characters that don’t ring entirely true. By the end of three hours, its stridency is wearing.