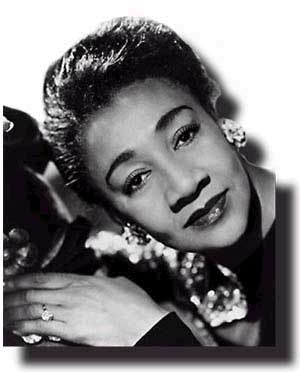 For pure entertainment it is hard to beat Cookin&#146; at the Cookery, currently playing at the Geffen Theater&#146;s temporary home, the Brentwood Theater. Though Alberta Hunter may not be a household name to many, her story is at once a chronicle of the black experience in twentieth century America; the legacy of an extremely talented women who, despite all odds made it to the top; and a loving tribute to jazz and the blues.

Hunter&#146;s music speaks for itself and writer Marion Caffey wisely lets it do so. With eighteen separate numbers in the first act alone and Hunter&#146;s lyrics full of subtle and not so subtle innuendo, it is easy to think that Cookin&#146; is more of a nightclub performance than a play. Easy, that is, except for the fact that the story of this extraordinary performer is awe inspiring without being cloying.

Hunter was born in Memphis Tennessee in 1895. Two days after her birth her father deserted the family for Chicago, leaving Alberta&#146;s mother with two daughters to raise. Her mother was a very proper woman determined to instill virtue, manners, and reading into her girls. Alberta, a little girl with very big dreams, adored her mother but was attracted to her aunt&#146;s more earthy, and more black, gospel singing congregation. She embraced the black experience and sought to sing at every opportunity. She told her mother that one day she would "sing for the president in the White House."

In 1907, the lure of performance overwhelmed her. At the age of twelve she left home for Chicago where her optimism, energy, willingness to take any job, and her sheer talent finally earned her a gig at a club. Her blues career spanned the next five decades without interruption. In addition to performing at all the hot jazz and blues spots, she wrote music and lyrics that were performed by the likes of Bessie Smith and she appeared on Broadway; she was an international success.

In the late forties she had homes in London, Paris and New York, but her career began to wane. When her mother died Alberta abruptly left the stage, returned to school and then worked as a nurse for twenty years. She had taken twelve years off her age to get a job in a hospital and was devastated when, at the age of 82, she was fired by her condescending white supervisor (who believed Alberta was only 70) for being too old. Devastated by the loss of meaning in her life she received a call from Barney Josephson, an old friend who ran The Cookery in Greenwich Village. Reluctantly she agreed to perform. At 82, with a voice still strong, a feisty delivery and risque patter, she had a remarkable comeback. Ultimately she realized her childhood dream singing her very raunchy "Handyman" for President Carter, in the White House.

Yes, it is a feel good story, but it is hard to experience feeling good without first knowing the flavor of pain. Though some of the story is exaggerated (perhaps unnecessarily &#150; Hunter&#146;s mother did not really die when she was doing a USO show in Korea) Caffey lets the pain of discrimination, segregation and poverty show through. Hunter had a triple whammy. She was black, female, and a lesbian at a time when any one of those was enough to make her success remarkable.

All of this is conveyed by two strong and talented actors, Anne Duquesnay and Montego Glover, in a dialogue that bounces back and forth in time. They are well backed up on stage by an upbeat four piece ensemble lead by George Caldwell. Duquesnay is the mature Hunter, seductive despite arthritis and a tremor, and with a gravely, smoky voice that captures the essence of Hunter&#146;s delivery. If anything, the CD made of Hunter at the Cookery was outshone by Duquesnay&#146;s performance.

Glover is billed as "the Narrator," hardly an apt descriptor for the breadth and centrality of her part. Slender and small, she plays the young Alberta through to her fifties plus a host of other characters including Louis Armstrong whom she impersonates dead on. Perhaps writer, director, choreographer Marion Caffey would be wise to limit his scope a bit. The movements of the very young Alberta were not convincing. The problem lies somewhere between the choreography and direction. But so much is right about Cookin&#146; at the Cookery that this flaw pales. Glover covered the remarkable age span with a voice that matured and minimal props to convey the various roles she was playing.