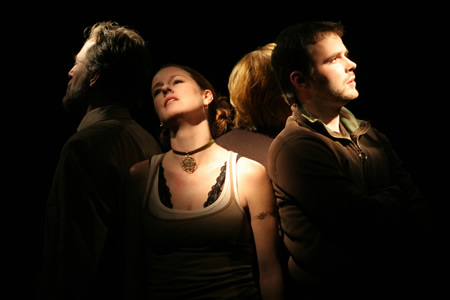 Crave, a one-act drama that premiered in 1998 by the late Sarah Kane, comes out of the experimental and absurdist tradition of Samuel Beckett, Harold Pinter, and Edward Albee. Like the plays of Beckett, Pinter, and Albee, Crave combines wordplay, searing questions, and fragmented discourse. Kane uses her combination of poetic language, repetition, cliché, and quotes from writers such as William Shakespeare and T. S. Eliot to create a disarming trance that oscillates between lyric lullaby and screaming nightmare.

Signature Theatre of Arlington, Virginia, under the direction of Jeremy Skidmore has mounted a viscerally connected production that begins the minute audience enter Signature’s brand new black box theater named The Ark. In the minimalist proclivity of Beckett, Kane provided no stage directions, leaving the piece wide open for interpretation. Skidmore has placed the four unnamed characters on pedestals stationed at the center of the back row on the four sides of a theater-in-the-round setup. In the half lit theater, the characters designated only by letters—A (John Lescault), B (Joe Isenberg), C (Kathleen Coons), and M (Deborah Hazlett)—create an unsettling feeling as they tower over the audience and grimace through the shadow-filled twilight. Skidmore said he had trouble conceiving a framework for this piece until rehearsals began and then he realized the fragmented text seemed to be coming at a person on the brink of jumping off a building.

When the theater goes black, marking the beginning of the play, the players leave their shoes behind and make their way to a rectangular sandbox. Barefoot in the sand, it is clear that all four characters are vulnerable to the assaults of living and each other. Literally, the sandbox brings to mind Albee’s play The Sandbox, which deals with the onset of death.

The single word that particularly informs Crave—the word free—is the last word spoken in the play. Like the message of Albee’s The Sandbox, the characters of Crave allude to what ends life even as they each struggle to overcome the stresses of modern living: addictions like smoking, drinking, watching daytime TV and problems with fertility, deviant sexuality, ageing. Uses of the word free document this struggle with life. “If I could be free of you without having to lose you.” “To be free of memory./ Free of desire.” “You’re dead to me/ Glorious. Glorious. / And ever shall be / Happy / So happy / Happy and free. [closing words]”

Each of the actors delivers his or her lines with precision, making for a lyric wholeness. Kathleen Coons as C, the character that speaks the opening and closing lines, stands out in particular with some je-ne-sais-quoi inflection in her voice and body movements. With lines like “You’re dead to me” (the opening words) and “Three summers ago I was bereaved. No one died but I lost my mother,” C probably most represents the playwright Sarah Kane who committed suicide in 1999 at the age of 28. In fact C says the word dead and the word free more than half the time these words are scripted in Crave. Skidmore has cast Kathleen Coons perceptively.