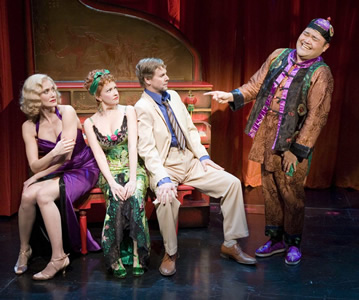 You remember that fateful night as though if were yesterday. You’d just stepped off a tramp steamer onto the fog-shrouded waterfront in Macao. With battered suitcase in hand you were running from something best not mentioned. Shots rang out, someone screamed, a mysterious figure ran past carrying a black figurine of a bird, perhaps a falcon, maybe from Malta.

Out of the dangerous and deadly darkness came a man in a trench coat. “Pssst,” he psssted, “you like silly? You like very very silly?”

Nonplussed, you nodded. He said, “Well, stick around, we got some very very silly for you. With music, no nudity, but two low-cut evening dresses, and even some dancing.”

And if you were telling the truth when you said you liked silly, you could sit back (suddenly you find yourself sitting in Theatre A at 59E59, one of off-Broadway’s most comfy venues) and just let the outrageously funny, glamorous, tuneful silliness wash over you for an hour and half while you giggle and guffaw. Adrift in Macao is one heck of a delightful hour and a half with a talented, congenial cast in a musical with book and lyrics by Christopher Durang and music by Peter Melnick. Director Sheryl Kaller and choreographer Christopher Gatelli are definitely in on the gag, and they keep it all moving at a sprightly pace.

There’s a plot you could write on the back of a soggy cocktail napkin from the night club run by Rick Shaw [sic!], and have room left over for the phone number of the toothsome cigarette girl or the hunky guy behind the bar, depending. There’s music that fits each moment just fine. It’s nimble, tuneful, fetching, and just right for the silly lyrics and outrageous situations. There’s dialogue that’s funny, sometimes grinningly and groaningly funny, sometimes downright witty, sometimes (here’s that word again!) just silly.

And then there’s one of the most enchanting casts imaginable. Rachel de Benedet is the sultry night club singer one step ahead of her past, glamorous with a few-times-around-the-block world weariness. And she really can sing. As a poor man’s Carmen Miranda, Michele Ragusa is one of those actors you can’t take your eyes off of for fear you’ll miss some well-turned comic moment.

Will Swenson is Rick Shaw and Alan Campbell is Mitch, a man whose mission here in Macao is to track down the mysterious Mr. McGuffin

(borrowed from Alfred Hitchcock’s word for the kernel every suspense plot needs to spin around). They are well cast, good enough singers, and able to be very silly (OK, thesaurus to the rescue: ridiculous, mad, childish, inane, asinine, juvenile, harebrained).

Jonathan Rayson and Elisa Van Duyne play the cigarette girl and the barman and sing and dance in the chorus numbers. They give performances that made this viewer wish they had larger roles.

But the supremely silly comic star of this very silly enterprise is Orville Mendoza who plays Tempura, an entirely, by his own description, “scrutable” Chinese troublemaker. The trouble he makes is hilarious, and Mendoza is an extremely talented comic actor at the top of his form.

In a program note, Christopher Durang says that he and Peter Melnick wrote Adrift in Macao in a “good mood.” Here’s to more plays and musicals written in a good mood!