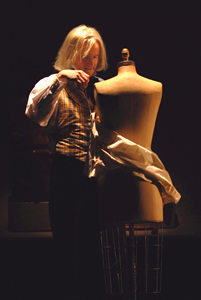 Written and directed by Robert Lepage

The Beatles said it first: “All the lonely people, where do they all come from?” In the case of Robert Lepage’s “The Andersen Project,” they come from Montreal, Morocco, Copenhagen and Paris for starters. Lepage, of Cirque de Soleil fame, wrote and directed this play for his own Quebec-based Ex Machina troupe, inspired by two of the darker fairy tales of Hans Christian Andersen. But this is not child’s play. Sex is an obsession with at least one of the characters and a key setting involves multiple booths at a pornographic peep show emporium.

Actually, the Andersen fables, “The Dryad” and “The Shadow,” are little more than a frame upon which to hang a modern-day tale. A hip, pop tune lyricist from Montreal has been commissioned to write a children’s opera based on “The Dryad” for the Opera Garnier. Frederic, the songwriter-turned-librettist, brings more baggage to Paris than can be stored in the overhead bin of an airplane. For one thing, he is an albino – and rather sensitive about it. For another, he has just been dumped by his girlfriend of some 16 years. He’s pretty sensitive about that too. The urbane, slippery director of the opera house – the other major character in the show, has his own troubles. He is addicted to autoeroticism, his wife is sleeping with his best friend and he can’t find enough money for the Andersen Project, as the projected opera is called.

Protean performer Yves Jacques plays all the parts and it is worth the price of a ticket just to see him do it. He changes costumes and accents seamlessly, turning from the writer into the opera director, into a wordless Moroccan janitor who moonlights as a graffiti artist and, briefly, into the tormented, sexually repressed Hans Christian Andersen himself. He is onstage for every minute of the two-hour plus (with no intermission) proceedings and he is pure magic.

Jacques is a long-time collaborator with Lepage. The latter is known for his striking theatrical effects and experimentation (he directed San Francisco Opera’s “The Rake’s Progress” in 2007) and this is techno-theater at its tricky best. Using lighting, video projections, puppetry and all kinds of motion gimmicks, (the funniest being an excitable little dog on speed), he takes full advantage of 21st Century technique, even when presenting us with a 19th Century fairy tale. This, of course, enhances the metaphor of the old world (Paris in the Andersen tale) with the new (Paris with FAXes and cell phones and peep shows). It also is a virtual commentary by a contemporary artist on how art is made – another underlying theme of the show.

But it comes at a price. At some point, the effects take over. “The Andersen Project” is less driven by the plot than by its electronics. After all the flash and glitter; after a performance that defines the term tour de force, one is left with a sense of letdown. Two guys, from two different milieus, are left alone in an uncaring world. And a marginalized African janitor takes his revenge with a can of spray paint. So, what else is new?