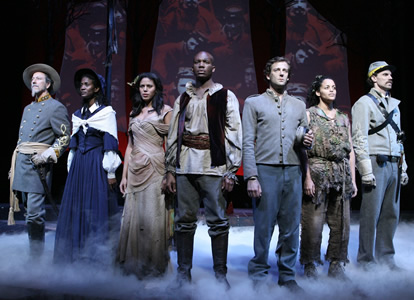 Music and Lyrics by Marcus Hummon

The Geffen Playhouse has an ambitious project on its rather small stage, the premier of a civil war musical. It is ironic that across town The History Boys tries to create intimacy in the more cavernous Ahmanson Theatre which would be a natural for the sweep of Atlanta, but that is where we are. Our “object so sublime” may be to “make the punishment [or the stage] fit the crime,” but life does not always work out that way. Set designer, John Arnone manages to pull off his end of the deal creating a flexible scene amongst the suggestion of trees. On a darkened stage he uses a combination of civil war photos and projections of passing scenery to indicate place and movement of the troops onto three sheet-like screens hung between trees behind the five able musicians, directed by Andrew Rollins. They are the highlight of the evening particularly Karen Briggs on the violin.

Character development? What character development? In some cases it is more like caricature development with large helpings of gross sentimentality. Perhaps author Hummon thought that because the types were so familiar from other literature the audience would fill in all the blanks and feel emotionally moved. First we have the southern Colonel, a plantation owner accompanied to battle by a small group of slaves whom he both uses and abuses. Lieutenant Virgil, his right hand man, is pure redneck: illiterate, uncouth, bigoted ready to punish or kill at a moment’s notice, and many cuts below the three slaves. The slaves are educated and are achieving protection of some sort, luscious Cleo (short for Cleopatra) whom the Colonel regularly beds and Hamlet because, not only were the two of them house slaves who had lived in close quarters with the Colonel, but the Colonel loves “the book” That is Shakespeare, not the bible, and they perform for him at a drop of the hat.

A wet behind the ears Union soldier kills a Confederate soldier, is shocked at what he has done then, because he is behind enemy lines, steals the southerner’s clothes and identity, including a packet of beautifully written love letters he appropriates for his own emotional needs. The Lieutenant is ready to kill the young man, but he is saved because Hamlet, the black slave who stages the presentations has lost one of his players and needs a replacement … and that is just the set up.

Three recent books come to mind as having painted much more complete pictures of the antebellum and civil war south, the complex relationships between blacks and whites and across classes: The Known World, Cold Mountain and March. No where does Atlanta seriously approach any of their emotional impact or tackle the complex and destructive social structure of that era. The three slaves and the young soldier might as well have been a wandering troop of itinerant players punctuated by gunfire. An example of the sloppy story telling: mention is made that Hamlet is in fact a freeman and the son of the Colonel, but none of this becomes significant to the story line and if you blinked you might have missed the references completely.

Hummon further hampers his story arc by having the cast regularly face the audience and break into song. Then there are occasional additions of dance which, except for Moe Daniels as Puck in the second act, looks like it could be improved upon by the average theater arts major at a performing arts high school. Marcus Hummon is one of the most successful songwriters in Nashville, but successful songwriter does not a playwright make. If you close your eyes and think of Atlanta as a mild country/soul/bluegrass concert with a soupcon of rock, and mercifully not over amped, the music has a comfortable, if sentimentally familiar feel helping the two hours and five minutes pass without too much discomfort.

In the end, maybe it is a dietary issue: I really do not like schmaltz and that is pretty much what Atlanta is serving up.