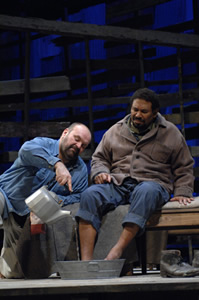 Athol Fugard has long been a champion of brotherhood between the black and white citizens of South Africa, his native land, but perhaps never so blatantly as in “Blood Knot.” This early work actually is about two brothers, one dark and illiterate, the other more educated and capable of passing for white, living together in a shack outside of Port Elizabeth. The message is not nearly as subtle as in Fugard’s later works (“A Lesson From Aloes,” “Master Harold…and the boys,” “Sizwe Banzi is Dead”) but it still resonates years after apartheid has crumbled (gone, but not forgotten).

Back in 1961, when the young Fugard, a white man, and his friend, the black actor Zakes Mokae, gave clandestine performances of the two-man show to packed (and racially mixed) houses in Johannesburg, “Blood Knot” was an incendiary sensation. And a national scandal. International acclaim for the work prompted the South African government to confiscate the playwright’s passport in 1967 (he eventually got it back and he and Mokae reprised their roles on Broadway a decade later).

The simple story of two lonely black men who mistakenly become involved with a white woman “pen pal” takes on mythic proportions in Fugard’s hands. His poetic language and free-ranging imagination turn the most mundane activities – the soaking of tired feet, the buying of a suit of clothes – into metaphors for something much larger.

The performances, by two members of the ACT core company, are impeccable. Zachariah (Steven Anthony Jones) was a happy-go-lucky fellow once upon a time. Locked into a menial job for the white establishment (he’s a guard who has to chase black kids out of a “Whites Only” park), he lived from hand to mouth, spending his week’s wages on women and booze come Friday night. Then, one day, his long-lost brother Morris (Jack Willis) appears on his dusty doorstep. Morris, who has traveled the country and dipped a toe in the white man’s waters, is cut from a different cloth. Reclusive, abstemious and pious, he keeps house for his brother, pinching the pennies and regulating their lives by the ring of an alarm clock which signals when they eat, when they say their prayers and when they go to bed.

The tedium of this routine begins to get to the fun-loving Zach (as well as the audience). The first half of this show, although quite funny at moments, is slow going compared with the tension and revelations of Act Two. Zack wants a woman. The audience begins to long for intermission.

What begins as a harmless way for Zack to sublimate his sexual frustrations turns deadly dangerous when a snapshot, enclosed in the pen pal’s enthusiastic reply, reveals that she is of a different race. Horrified, Morris, until now a sort of Cyrano composing and reading letters for his brother, warns of the peril but Zack wants to continue. When a meeting seems imminent, he suggests that his light-skinned sibling be a stand-in and spends their savings on a proper gentleman’s outfit.

But “there is more to being a white man than putting on a hat” as Morris cautions and a series of role-playing games soon proves it. The darker brother now has the upper hand over the once-bossy, now-terrified Morris who has dabbled in the white man’s world to his regret. Soon they are engaged in a metaphorical struggle for the soul of South Africa itself, symbolized by the long-dead mother who is seen in dreams and visions and is recalled quite differently by each of the men.

The symbolism gets a little heavy-handed at the very end but, in the hands of Willis and Jones, the ride is more than worth a few bumps along the way. It all takes place in Alexander V. Nichols stunning shack of skewed slats and two-by-fours, open to Kathy A. Perkins’ changing light. Charles Randolph-Wright directs with nice mood music composed and recorded by award-winning pop diva Tracy Chapman.