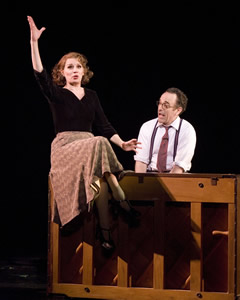 What a relief. Writer Douglas Carter Beane (As Bees in Honey Drown, Xanadu) lifts a weight from your shoulder from the get go. He obviously has taken apart the original 1953 MGM screenplay “The Band Wagon”, which this musical is based on, and has pieced it back together in a completely different and clever way. While the movie contains wonderful music and dance numbers, the story was somewhat compromised when the original writers’ team, Betty Comden and Adolph Green (“Singing in the Rain”), lost their studio contract halfway through the project.

In this stage version, acclaimed snobby British actor/director Jeffrey Cordova (Patrick Page) is looking for a new challenge: directing a Broadway musical. To accomplish this task, he hires writing couple Lester and Lily Marton (Adam Heller and Beth Leavel) and the has-been Hollywood actor Tony Hunter (Scott Bakula). To this group, he adds a dancing leading lady Gabrielle Gerard (Mara Davi) and her modern dance choreographer boyfriend Paul Byrd (Sebastian LaCause). There is no lack of conflict between these characters which delights Cordova: “That’s how we create great art!” Despite the tensions, everyone gets excited about the project and decides to work together: after all “That’s Entertainment!” Things turn a little sour when Cordova has the brilliant idea that the musical piece they’re about to create should be a modern interpretation of Faust. We know there is trouble around the corner when the Martons pitch their opening song whole heartedly and Cordova dramatically announces “I like the idea of the song…, but I don’t want the song.”

Patrick Page (Broadway’s Dr. Seuss’ How the Grinch Stole Christmas!) as Jeffrey Cordova, is an absolute delight. His comedic timing and snootiness are perfect. He is joined by the wonderful Benjamin Howes who plays his multitalented right hand man (“and the left, too”), stage manager Hal Meadows. To some, it may come as a surprise that Quantum Leap TV star Scott Bakula can sing and dance. In fact, Bakula is returning to his musical theatre roots, having started his career in New York in 1976. He earned a Tony nomination in 1988 (Romance/Romance) and recently enjoyed a successful run in Shenandoah at Washington, D.C.’s Ford Theatre. His partner, the very adorable and talented Mara Davi (A Chorus Line, The Drowsy Chaperone) gets to showcase her recently acquired modern dancing abilities. But in this play within a play scenario, the writers steal the show. Tony Award winner Beth Leavel (The Drowsy Chaperone) and Adam Heller as Lily and Lester Marton, give incredible and magical performances. I found myself wishing the show were even more centered on these two characters.

Director Gary Griffin (The Color Purple) and his team of designers did a beautiful job honoring Douglas Carter Beane’s rewrite. The show flows well between flash-backs, rehearsals, back and on stage perspectives. The audience will enjoy the numbers that made the movie a success, such as “That’s Entertainment”, “Triplets”, “I Love Louisa”, “Louisiana Hayride”, “A Shine on your Shoes” and “Dancing in the Dark”, among others. Choreographer Warren Carlyle, with the help of a very solid ensemble, explores the extremes of his art, going from a wonderfully ridiculous and humorous modern ballet to the very touching and romantic “Dancing in the Dark” number. Costume designer David Woolard also gives us a precious gift in “Rhode Island is Famous for You”, with costumes I can only describe as fantastic “eye candy.”

In the end and for the pleasure of audiences to come, Dancing in the Dark could very well become Broadway’s tribute to two of Douglas Carter Beane’s idols, Betty Comden and Adolph Green and the crazy creative world they lived in.

(9573)
$19.99 (as of January 21, 2021 - More infoProduct prices and availability are accurate as of the date/time indicated and are subject to change. Any price and availability information displayed on [relevant Amazon Site(s), as applicable] at the time of purchase will apply to the purchase of this product.)
related posts