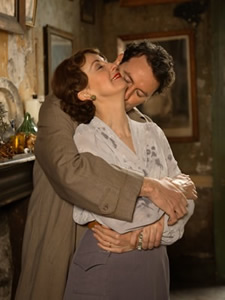 Suicide is a significant social problem in contemporary Ireland. From about 1970, the suicide rate began a steady climb, climaxing around the year 2000 with some 500 suicides per year (more than die by road accidents). Ireland has a particularly high rate of youth suicide, and with figures not taking into account drug and alcohol related deaths that may have been at least partly suicidal in impulse, or at least self-destructive, the issue receives quite a bit of public attention. In such an environment, Terence Rattigan’s The Deep Blue Sea, must, of necessity, take on a different complexion than merely being a twee middle-class entertainment.

Rattigan was once one of the most successful and well-regarded playwrights in mid twentieth century Britain. His post-war work was considered significant in helping the country to find its moral compass as the last trappings of Empire faded. The Windslow Boy and The Browning Version are still in circulation, and both were even filmed comparatively recently. The playwright’s milieu being primarily that of a by now clichéd stiff-upper-lip British post-aristrocracy, there has been a subsequent dismissal of his relevance, or at least a downgrading of his work to the status of quaint museum pieces.

The Deep Blue Sea is a curious case in point. Inspired by the suicide of his own real-life recently ex-lover Kenneth Morgan, Rattigan’s play opens with the huddled body of a woman, Hester, lying by a gas fire. Her suicide attempt has failed, perhaps intentionally, but the result is that she is able to speak with her lover, Freddie, and her abandoned husband, Sir William Collyer, and several others, in the course of the play. No one can quite understand why she tried to kill herself or what she is feeling, except possibly the German ex-doctor Mr. Miller.

It is a strong play: classically ‘well-made’ and carefully worked through to arrive at an unlikely but absolutely necessary ‘happy’ ending entirely understandable in the context of its creation. The self-conscious appeal to seeing light in the darkness and finding escape through artistic self expression upon which the final scene turns is almost unbearably poignant knowing both Rattigan’s personal story and, again, considering the reality of suicide in contemporary Ireland. It is shameful, in a sense, that the dramaturge in us wants Hester to die, or at least leave us uncertain. But Rattigan does not, in fact, let his heroine leap into the deep blue sea, but leaves her finding a place between the proverbial devil and this other.

There was, perhaps, an opportunity here for The Gate Theatre to ‘reinvigorate’ Rattigan in the way the Druid found unexpected power in John B. Keane in recent years. Keane’s work was also mired in cliché and the expectations of audiences of a rollicking laugh at the foibles of rural Ireland, but through Garry Hynes’ high-minded rigour, the playwright’s core dramatic and rhetorical power was unleashed in startling ways (Big Maggie, Sive). Director Alan Stanford concentrates on carefully rendering Rattigan without tittering irony, and though that is good and it allows the play to stand on its own merits as a work of writing for theatre, it will not actually allow the play to reach beyond the milieu that continues to plague it. Young Irish teens will not come to see this play, nor anyone else in need of a powerful message of hope. It remains altogether too ‘respectable’ for that.

To some extent, this is inevitable with Rattigan’s “oh Dahling” type dialogue, but the fact is that that dialogue is all about the barriers that people erect between themselves with language. Behind the stiffness is intense human pain – intense enough for Hester to try to kill herself. This production allows that to come through, but, unlike Druid’s Keane, does not find ways to push it forward and make it heard by a wider audience.

None of this takes away from the skill with which the production has been mounted. It is very well rendered, and draws an excellent performance from Ingrid Craigie as Hester. She conveys Hester’s passion and hesitancy both equally well, giving us a sense of the delicacy of the psychological and emotional balancing act she has been carrying out in this attempt to find her own space in a world that seems unable to accommodate her. Her movements are near-perfect, conveying a physical being on the verge of either collapse or flight – capable of bursts of energy, but desperate to conceal them or contain them. The rest of the cast are also perfectly good, and work their characters within the boundaries of the overall ethos very well. Bryan Murray does another variant on his Alexei Karenin from the Gate’s Anna Karenina: all stiffness and pomposity, but touched with a genuine concern for his estranged wife that actually works. John Kavanagh is also characteristically superb in his usual low-key fashion as Dr. Miller. He moves with careful deliberation around the stage, conveying the mind of a man who understands the subtext of everything and is capable of making an intervention.