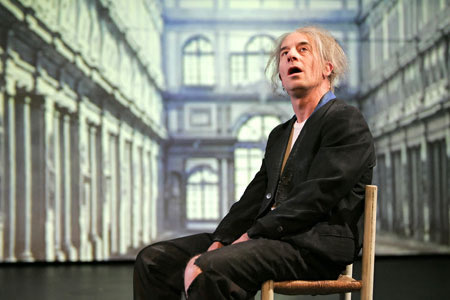 Inspired by Mozart and Beaumarchais

Designed and Directed by Dominique Serrand

Berkeley Rep is offering the best two-fer in town. For the price of one ticket you get a play and an opera and both are fantastic. Theatre de la Jeune Lune, the multi-talented Minneapolis troupe that brought “Don Juan Giovanni” and “The Miser” to Berkeley in previous seasons, has trained its sights on the timeless tale of the clever barber who outwits his imperious master every time, re-imagining a postlude after Mozart and Beaumarchais put down their pens, and weaving the past, present and future into a colorful tapestry of time.

Framed by video projections (by the amazing Dominique Serrand, who also adapted the story, directs and stars) that form an 18th Century backdrop and also, from time to time, give us close ups of the characters as they speak or sing, and accompanied by the 7th Avenue String Quartet which does yeoman orchestral duty, “Figaro” is a multi-media feast for the eye and ear. And, if you didn’t especially like opera (specifically Mozart’s “La Nozze de Figaro”) going in, you just may turn into a fan by the time you leave.

What Epp and Serrand have given us are snippets of the Mozart work (with a few echoes of Rossini’s later “Barber of Seville”), staged as dreamy recollections of their youthful escapades by two old men, holed up in a building during the French Revolution. The young singing actors are easy on the eye, highly adept at physical comedy – a trademark of this troupe — and in good voice sufficient to make an opera company proud. Huge bouquets go to Bradley Greenwald, as the fickle, lecherous Count Almaviva (he also adapted the music), and the lovely Jennifer Baldwin Peden as his long-suffering Countess, with the pert Momoko Tanno (Susanna, Figaro’s bride) and Christina Baldwin as the lovesick page Cherubino running a very close second. Excellent support is given by Bryan Boyce as Figaro, Carrie Hennessey as Marcellina and Justin D. Madel as the meddlesome Basilio.

But the stars of this show are Serrand as the old Count and fellow-adaptor Steven Epp in the title role. Bound in a love-hate relationship, the servant and the master replay the scenes of their youth (the operatic segments as the characters materialize from under a tablecloth, between the sheets of a bed or, like the Countess, drawn in a boat filled with red roses) even as they continue their lifelong war of words. Their dialogue is peppered with topical references and inspired slapstick and it is darkly hilarious. There is a war going on out there on the streets but the Count, hiding out from the guillotine, still expects his loyal “Fig” to pull out his chair and fluff the pillows on his bed. Figaro, in turn, sympathizes with the democratic sentiments of the revolutionaries but continues to wait on his master, grumbling all the time and risking his own life to keep the old man from being discovered. (How these folks got to Paris from their native Seville is never explained but Beaumarchais, the original playwright, was French, after all). To watch these two brilliant actors go at each other would be a reward in itself, even if the play did not have such a multitude of other riches.

The second act, while no less amusing, takes a few philosophical turns. Epp has a long monologue on man’s existence in general, his own in particular, and all the pain of life is seen in his face and eyes, projected larger-than-life on the video screen. The Count too finds disillusion at the end of his road. The Countess and Cherubino become tragic figures and only the servants, Figaro and his Susanna, seem to get what they want. For a while. The finale, set against Mozart’s great sextet of forgiveness, marches to a surprising conclusion.

The costumes, by Sonya Berlovitz, are as lovely (or in the case of the two refugees, ragged) as those who wear them and Marcus Dilliard’s lighting design gives us explosions in the streets and moonlit trysts in the garden as required. If there is one quibble with “Figaro” it may be that it is a little on the long side. Three hours is just about the length of a whole Mozart opera. But, at the risk of being beaten over the head with the rolled-up libretto of the purist, I venture to say that this version is a lot more fun.