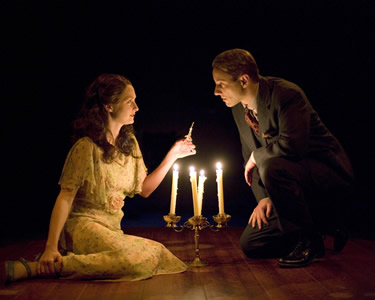 It is hard not to have high expectations when you go see one of the most renowned American plays, a mastodon of the sort, at a very reputable theatre such as the Old Globe in San Diego, California. The production of Tennessee Williams’ The Glass Menagerie is part of the company’s “Classics Up Close” series. But with the help of a great group of artists, the Old Globe Theatre pulls through.

The Glass Menagerie is a memory play that takes us into the world of the Wingfields, a St. Louis family living in the “school for the blind” that is America in the 1930s. The son, Tom Wingfield, narrates the play and through him, Tennessee Williams poetically sets the mood by describing the state of mind of citizens at the time: “Their eyes had failed them, or they had failed their eyes, and so they were having their fingers pressed forcibly down on the fiery Braille alphabet of a dissolving economy.”

Amanda Wingfield is a single mother trying to raise her two kids after their father left “a long time ago. He was a telephone man who fell in love with long distances.” She desperately wants her “crippled” daughter Laura to find a job and a respectable husband, but the beautiful girl is painfully shy and border line asocial. Laura finds refuge from her controlling mother in a fragile glass animal collection that inspires the title of the play. The son, Tom, is the bread winner and resents this commitment. He proclaims: “what is there left but dependency all our lives” and to escape the family drama, he goes to the movies for a fictional adventure fix and comes home drunk. Amidst these characters arrives a greatly anticipated gentleman caller, Jim O’Connor.

The description of the play might seem depressing, but Tennessee Williams’ reputation as a staple of American theatre is based in part on the fact that he knew better than most how to entertain the audience. The author uses humor beautifully to punctuate the piece and entices us along with glimpses of hope. He is well served in this production by masterful actors who do not miss a beat. It is a treat to see Emmy Award winner Mare Winningham on the intimate in-the-round stage. She plays the role of the co-dependent matriarch Amanda Wingfield and is surrounded with equal talents. Michelle Federer as Laura is astonishing in her physical interpretation of both the disability and fragile disposition of the character. Michael Simpson as Tom demonstrates great versatility in his narration and role playing and Kevin Isola as gentleman caller Jim O’Connor nails the part of the most realistic character of the play.

Director Joe Calarco has orchestrated a beautiful drama from a simple and effective set (Michael Fagin) with few essential pieces of furniture to lights (Chris Lee) appropriately setting the various moods of the play. The innovative narration recordings (Lindsay Jones) help our understanding of Tom Wingfield and his family through the piece, while period costumes (Anne Kennedy) fit every scene and character.

If you have never seen or read this American classic or if you have not yet been impressed by a production of it, check it out at the Old Globe Theatre in the next few weeks! And if you are a classic and Williams fan, simply do not miss it.