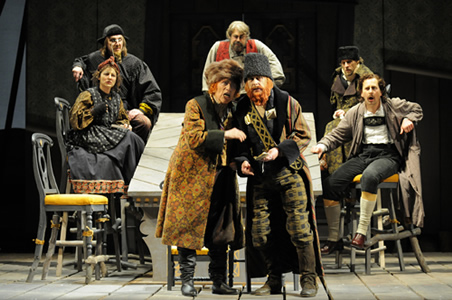 In Nicolai Gogol’s “The Government Inspector” a gaggle of inept bureaucrats spends a good deal of time pointing fingers at one another and anybody else that happens to get in their way. After seeing the beautifully mounted and performed revival of the 1836 classic at ACT, my tendency is to point at Gogol. You would think a tale of government mendacity would fit right into our own time of sex scandals, money laundering and other shenanigans in high places – and indeed, ACT is marketing this show on that premise – but, somehow, it doesn’t. Maybe television and the daily papers have inured our psyches to such stuff. Or maybe what happens in Russia should stay in Russia. Whatever.

An enormous amount of talent and energy has been expended on this staging, including the cream of the crop of Bay Area comic actors. Consummate clowns Joan Mankin and Geoff Hoyle play a pair of slapstick provincial busybodies and the intrepid Sharon Lockwood does the ambitious, sex-starved Mayor’s wife proud (she’s also the mother from Hell). Dan Hiatt is a corrupt magistrate; Delia MacDougall the reluctant schoolmarm and Anthony Fusco has a bravura turn as the drunken postmaster who reads everybody’s mail.

Gregory Wallace, ACT associate artist, may be the best of them in the title role. His character, Khlestakov, is of course not a government inspector at all, merely a penniless low-ranking registrar from St. Petersburg on his way to borrow some money from his father. It’s all a case of mistaken identity and that is the frame upon which Gogol hangs his tale. The Mayor (Graham Beckel) and his cronies, fearing for their jobs – and perhaps their very lives – shower the young man with hospitality, filling his empty stomach with food and wine, lining his empty pockets with wads of rubles and treating him like visiting royalty.

Khlestakov doesn’t have a clue but he knows a good thing when he sees it and soon falls in with the fallacy, telling lies that are even bigger than those of his hosts. His greatest calling card is the fact that he comes from St. Petersburg, described here as a kind of Nirvana, rather like Moscow might be to one of Chekhov’s heroines. Wallace swishes through the role in a fey manner, so effete you are pretty sure he is gay. So it is a surprise when one of the good things he sees is the Mayor’s beautiful airhead of a daughter (Amanda Sykes). The mother isn’t bad either so he tries to seduce them both, actually at the same time. Go figure.

The only voice of sanity in all this belongs to Osip, the phony inspector’s clever manservant and Jud Williford makes a pretty funny straight man. Another servant, the Mayor’s mostly-mute maid, becomes a real presence in the capable hands of Shannon Tiang who has only to drag herself across the stage to get a laugh.

Director Carey Perloff has orchestrated the comedy and conducted her large cast with a deft baton. But the whole thing wears heavy and repetitive with bright flashes of humor, like lightening, cutting through the long night. Some cuts in Alistair Beaton’s 2005 translation might have helped a lot. Erik Flatmo’s storybook sets, all tilts and angles, almost becomes a character in itself, as do Beaver Bauer’s amusing costumes. It’s all lit expressively by Alexander V. Nichols. In fact, just about everything about “The Government Inspector is first class – except the end result. Blame it on Gogol?