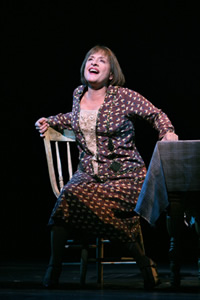 How an Unwilling Child Performer Gets to be Gypsy Rose Lee. And Other Plots.

“Gypsy” is more American than mere apple pie. It’s brash, loud, self celebrating, a package of “raw power,” as one critic says, and more such adjectives won’t approximate its sheer explosiveness. No question that the lavish production represents the “golden age” of musicals. The amazing Patti Lupone, playing Gypsy’s mother Rose, tears up the stage. She wants her daughters to be theater stars and insistently promotes them every moment of their lives. And hers. She gets no trouble about her ambition from the eldest girl, June, only an occasional presence in the play, who grows up in the distance to be the movie star June Havoc. But Louise, the younger daughter who becomes Gypsy, shares none of her mother’s desire and it is their conflict that gives the play its initial plot.

“Gypsy’s” unmistakably American all-out style stems partly from its basic idea that you may grow up to be anyone you want to be. Nothing stops you but you. That story. Patti Lupone’s Rose belts it out in the first big number, “I Have a Dream.” She feels it. She’s also “a woman with children,” her theme song. She may be the first mother character to make it in popular musical theater–there were Euripides’ women and Ibsen’s, but they hardly set out to “entertain you.” Lupone does, as she transforms the Laurents-Styne-Sondheim musical with an exuberance and energy that liken her to a force of nature, no mere cliche. The astonishing Ms. Lupone may well prove the other cliche that applies, that an image of show business inspires a working class woman to go for the ring. Just why and how American show biz is a lingua franca calls for another essay about the inspired team of writers and composers, Arthur Laurents, Jule Styne and Stephen Sondheim responsible for the miracle of this show. Not all collaborations work like marriages made in heaven

As a whole, the script falls into the well-exploited theme of theater about theater. Mother Rose’s passion for theater results in a kind of blindness to Gypsy’s status as queen of vaudeville–strip tease performers fell far, far below the status of actors on the legit stage. The script downplays that side of the theme in order to emphasize the positive, that the girl’s gift will propel her rise from obscurity, that her energy will triumph over handicap, in this case Gypsy’s own recognition that her theatrical talent is slight. There were no prototypes for her, after all. No women set out to be star performers in burlesque or vaudeville, even if some landed there.

Laura Benanti’s Gypsy embodies longing and sweetness, not the traits usually summoned up by a reference to the famous strip tease artist, Rose Lee. Onstage Ms. Benanti rolls down a long glove for a suggestion of the role. Her big song is “Let Me Entertain You,” but curiously she cuts through its sexiness with a hint of shyness. The combination gives her character an unexpected layer of richness. While in every image her sister, Baby June, gives a fake, open-mouthed, come-on smile, Louise tries to shrink into a background. Eventually, when she hits Philadelphia on tour, she gets to like her role and glory follows. The Styne-Sondheim music has become even more classic if possible than the show’s rags to theater riches theme. We have been whistling to it for fifty years, yet it has lost none of its infectiousness.

The other mother onstage this season is Linda Lavin’s Helene Nadler in “The New Century.” She is figuring out her conflicted feelings for a gay son while coping with her lesbian daughter’s impending wedding. By her own report, Helene Nadler is the greatest mother ever. (She also may be the most glamorous in her gold lame jacket and high heels.) Gayness and lesbianism have been integrated into cultural realities for some time now, so they are not in themselves shocking or cause for dramatic crises. Still, a mother’s unspoken expectations of conventional behavior by her children pull on maternal instincts, which Ms. Lavin personifies with an inimitable humor and grace. In her own right, she is a “craftsperson” who makes useful household articals like toaster covers and toilet paper rollers. At a local exhibition, Helene Nadler smiles at her audience with endearing dimness. Smart dialogue here is a plus by the playwright Paul Rudnick.

“A Catered Affair” centers on decision-making by the father of the bride: either foot the bill for a big wedding reception, or underwrite a long envisioned business advance. This is musical theater with lineage: written by Harvey Fierstein, four-time Tony award winner; directed by John Doyle; based on Paddy Chayefsky’s teleplay and Gore Vidal’s screenplay, “A Catered Affair.” It features the return to Broadway of Faith Prince playing Aggie, a woman who feels life has passed her by. The recognition hits her during the fraught wedding planning for her daughter and produces the ‘kitchen realism’ of the play’s basic style. It is an unusual fit with musical theater, more commonly delivered in an optimistic, up-and-at-‘em’ mode, or at least ending that way. This time, writer and composer deliberately set out to introduce an original specie with “more humanity,” their publicity says, than the genre expects.

Kitchen sink realism, instead, suggests the show’s setting in the Bronx and its hard working characters who cannot afford a big shindig, and more important, do not turn up in musicals. They personify the struggle to do more than make ends meet. The family has just learned of their soldier-son’s death and has accepted the gratitude of their country in the form of a check and a folded flag. Their daughter’s wedding offers them an opportunity to bounce back from sadness to renewed confidence. Tom the taxi driving father, played by Tom Wopat, is not easy to coax into good cheer. Superior costumes lend the show the look and ‘feel’ of a grim family in the ‘fifties. The lovely music by John Bucchino also offers Ms. Prince a chance to shine again in a Broadway show, the first she has performed in many years. She stars with a first rate company in a well polished production.

In interview, Fierstein says he wanted “to put more humanity” back into a musical. He felt dissatisfied with recent “spritzy” stage adaptations. His Winston, the bachelor uncle of the family, spends most of his time on the sofa. But the action centers on mother daughter tension arising out of her impending wedding. Fierstein’s six big hits from 1988 “Torch Song Trilogy” to 2005 “Fiddler On The Roof” lend his figure a ‘do no wrong,’ maybe even fairy tale element. Nowadays however, he says, when he leaves a theater he does not feel he’s seen a theater piece. “Gorgeous chorus boys undulating across the stage are all very well, but the piece starts “to feel like empty calories after a while.” (To quote Robert Kahn in Newsday, April 6, 2008.)

“Les Liaisons Dangereuses” by Christopher Hampton, is a charming, brief piece of theater, more like a summary of the well known epistolary novel by Choderlos de Laclos than a fully developed play. Against an elegantly mirrored back wall and in elegant costume, Le Vicomte de Valmont (Ben Daniels) embraces La Marquise de Merteuil (Laura Linney) standing behind her while she reads letters facing the audience. Their position is at once titillating and familiar, also an apt expression of their relationship. There follow eight brief scenes to Act One and nine in Act Two covering an autumn and winter in the 1780s of the principals’ affair. They move chiefly among salons where the main activity is gossip, delightfully captured by the script.

It’s not about anything else; the piece offers an atmosphere. And a vehicle for the brilliant Laura Linney. Her posture reflects her perfect hauteur, call it self-possession plus pride as well as a streak of maliciousness. A young girl infatuated with Valmont makes the mistake of confiding in the Marquise who is quite incapable of sympathy. She specializes rather in an icy cruelty that Linney gets just right.

Act One dawdles a bit and lacks a sharp focus. In Act Two pace and style fit perfectly. The action is easier to stage, what with Valmont’s dueling and then dying of a hit. Just afterward, a tangle of ropes and rigging become visible above a dropped curtain. The set becomes metaphoric. Linney’s closing line, “who knows what the future will bring,” cues in the slamming offstage of a guillotine. We know what her future will bring.

“The American Dream” by Edward Albee has become part of American repertory. The play is a brief satire. A middle class, childless couple, who call each other Mommy and Daddy, once upon a time adopted an American Dream that did not work out. His human traits right down to his nail biting made him unsuitable, though Mommy and Daddy kept cutting off offensive parts, like his tongue for calling Mommy “a dirty name” and his “you know what” which he played with despite their discouragement. Eventually he dies; so the adoption agency is supplying a replacement: a handsome boy in jeans and t-shirt who is welcomed eagerly in spite of his flaw. He is unable to love, is “incomplete,” in his words; but he allows himself to be loved, which makes him quite desirable. The character of Grandma serves as Albee’s mouthpiece, an inspired choice among the characters since, as she says, no one pays attention to old people. She may and does say what she pleases, which amount to caustic one liners on current manners and morals. Grandma reappears in Albee’s “Sandbox” only to be killed off properly.