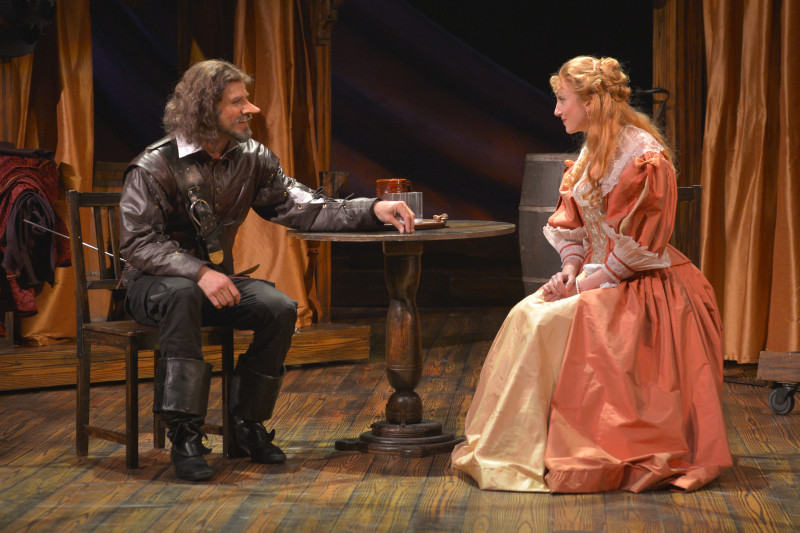 When I was a young college student I dated a lot of guys. But only one had my heart of hearts. His name was Cyrano de Bergerac. Between reading Edmond Rostand’s beautiful play and the seeing the 1950 Jose Ferrer movie, I was forever caught. A lot of the River Seine has flowed under the Pont Neuf since then, but my affection for the long-nosed, sharp-tongued swordsman has not wavered. And now, just in time for my dotage, the boy’s back in a fast-paced, well-acted production at TheatreWorks in Mountain View.

This truncated version of Rostand’s sometimes-wordy but always-poetic classic, translated by Michael Hollinger and adapted by Hollinger and Aaron Posner, features a cast of ten “standing in for multitudes,” as the narrator tells us, and they do it so well that the audience is barely aware of the same actors doubling and tripling in their various roles. The only one who stands alone is the title character — as he has since 1897 when he first trod the boards — a little larger than life and masterfully portrayed here by J. Anthony Crane. Swordsman, poet, wit and would-be lover, he goes his way with bravado, occasional hesitation, intelligence and, at the end, a touch of pathos, sweeping the audience along with him.

In case you didn’t read the first paragraph, I love this play. But, like any lover, I am jealous and I miss the parts Hollinger and Posner left out. The parts from my cherished, dog-eared Brian Hooker translation (copyright 1951) like the “No, I thank you” speech, which bits of are here given to a chorus of soldiers rather than the protagonist, robbing it of much of its power. And some of the most beautiful poetry in the balcony love scene and final death scene. But the sad truth is, contemporary audiences have trouble sitting through anything longer than 120 minutes and, to their credit, the adapters have cut a lot of the fat while remaining true to Rostand’s voice.

For anyone out there who doesn’t know, “Cyrano” is a love story in which the title character, a fellow with an absurdly long nose, writes letters and feeds lines to a handsome fellow soldier, Christian (Chad Deverman), who is in love with the same lady as Cyrano himself but too tongue-tied to woo her in the fashion she demands. That lady, Roxane, is played by Sharon Rietkerk, who has the delicate beauty for the part as well as the acting chops to begin as a giddy girl and progress throughout the play to a devoted wife and grieving widow.

No sooner does Cyrano win Roxane for Christian than their regiment is sent off to war by the lecherous Comte de Quiche (an appropriately haughty Peter James Meyers), who also has his eye on Roxane. Switch to the battlefield (great effects by sound designer Jeff Mockus and lighting designer Pamila Z. Gray). There Cyrano braves the enemy lines to send a letter (presumably from Christian) daily until the siege turns against the French and Christian is killed by a Spanish bullet. Fifteen years go by. Roxane has taken refuge in a Parisian convent where her old friend Cyrano visits her weekly to bring her the news of the court and the town. But, in the end, his sharp tongue has made enemies, one of whom arranges a fatal “accident.” Wounded and bloodied, the one-time swashbuckler makes one last visit to his lady love, during which the old deception and his life-long devotion are revealed in one of the most glorious death scenes in the literature.

The ensemble cast is pitch-perfect with Michael Gene Sullivan doing double duty as Cyrano’s captain and friend, Le Bret, and the narrator who does much to speed the plot along. Monica Cappuccini does all the women, from theatergoer to nursemaid to nun. TheatreWorks artistic director Robert Kelley adds another notch to his belt as director; Fumiko Bielefeldt did the attractive and appropriate costumes and fight director Jonathan Rider kept the swordplay as funny as it was skillful. The versatile set, by Joe Ragey, moves from a theater to a bakery to a balcony to a battlefield and more, making use of an enormous moon and falling leaves along the way.

If you have a romantic bone in your body, go see “Cyrano.” And tell him I send my love.