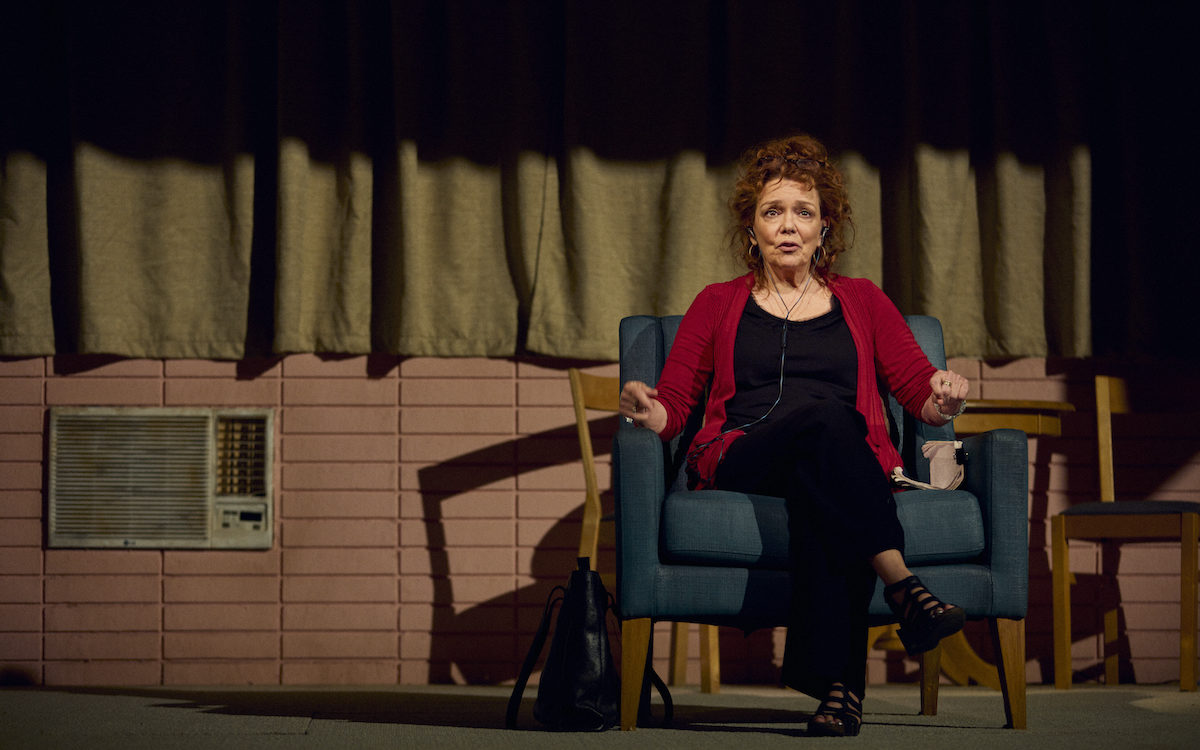 It’s early in the theatrical season but there is no doubt in my mind that I have seen the best performance of the 2021-2022 season. Deirdre O’Connell in the titular role of “Dana H.,” the new play by Lucas Hnath, is a stunning display of virtuoso acting for which there are not enough superlatives.

Hnath’s play is taken from recorded interviews with his mother, Dana Higginbotham, and performed to an edited soundtrack of the tapes with astonishing precision by Ms. O’Connell, who has to lip-synch to the real Dana H’s voice. It is the harrowing tale of a brutal incident in his mother’s life – one whose details were not completely known to the playwright prior to the process of creating this play. During the time that Hnath was at NYU, Ms. Higginbotham was abducted by a patient at a facility where she worked as a chaplain – it was a months-long ordeal during which she was tortured and raped by a violent criminal with Aryan Nation affiliations.

These interviews represent the first time in two decades that she had spoken about the particulars of the kidnapping with anyone. The interviews are skillfully, yet delicately, conducted by Steve Cosson, whose voice we hear occasionally. (Mr. Cosson is the artistic director of The Civilians, the theater company who is known for its acclaimed investigative theater work with shows such as “Gone Missing,” “This Beautiful City,” and “The Great Immensity.”)

The astounding part of Ms. O’Connell’s performance isn’t the technical part, which she handles expertly, never missing a beat, her words 100% perfectly timed to the recording.  Even though you have watched her enter and be outfitted with an earpiece that will allow her to hear what is on the audiotape, you will wonder if she’s lip-synching at all – she and the voice you hear seem to somehow merge.

What is more astonishing is how she’s able to create an emotional landscape for the character at the same time that the voice on the tape is aiming to do the opposite. While Ms. Higginbotham speaks with deliberate restrain, she is clearly still haunted (as anyone would be) by the events, and O’Connell is left to translate her interior psyche. Her wide expressive eyes can simultaneously reveal terror and empathy, dejection and strength.  With the slightest change in her facial expressions or a subtle shift in posture or a gentle rustle of the prop manuscript she holds, she is able to speak volumes about the trauma and torment her character has experienced.

“Dana H.” is beautifully directed by Les Waters and features an affecting (and effecting) sound design by Mikhail Fiksel. The set design by Andrew Boyce (a dingy motel room) is at first mundane and later menacing. Hnath has edited the play into a lean 75-minute one-act that keeps the audience transfixed and breathless.

At first, it might seem like a show that is performed to a recording might be limiting. As the play unfolds it becomes very clear that in the hands of an expert performer like O’Connell, it is an opportunity to serve as a channel for the real Dana H—her voice and story can finally be heard after twenty years of silence.  Although this is not easy to watch for some – the depictions of savagery, the terror that Dana experiences and her confusion at her own fuzzy memories are deeply unsettling—the audience leans in to catch every word, spellbound by the incredible Ms. O’Connell. It feels wrong to use the adjective thrilling for a piece of theater that is centered on a real-life violent act, but the show is riveting, taking the audience on a roller coaster of emotions to the end.